A recent study from MR Perkin et al (NEJM 2016; 374: 1733-43) examined whether early introduction (3 months) of allergenic foods in 1303 infants lowered the rate of allergies to these foods at 3 years of life compared to standard introduction (after 6 months).  The six foods: peanut, egg, cow’s milk, sesame, whitefish, and wheat.

While the study did not reach a statistical significance, the absolute rate of allergies was modestly lower in those in the early introduction group (5.6% compared with 7.1%).  In a per-protocol analysis of those who strictly adhered to the assigned treatment regimen, there was an even lower rate of 2.4% (compared to 7.3% in the standard group).  The associated editorial (pg 1783-84) indicates that the demanding protocol limited those who adhered to the protocol and points out that those who were not adherent could have been due to reverse causation (eg. subtle avoidance to certain foods due to reactions).  The editorial conclusion: “evidence is building that early consumption rather than delayed introduction of foods is likely to be more beneficial as a strategy for the primary prevention of food allergy.”

My take: Early introduction of allergenic solids at ~3 months of age probably lowers the risk of developing allergies to these foods. 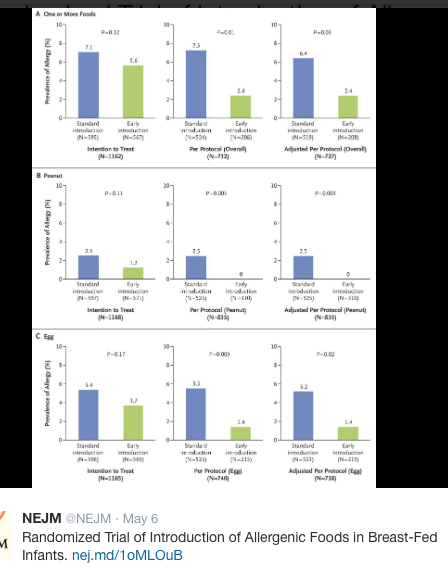 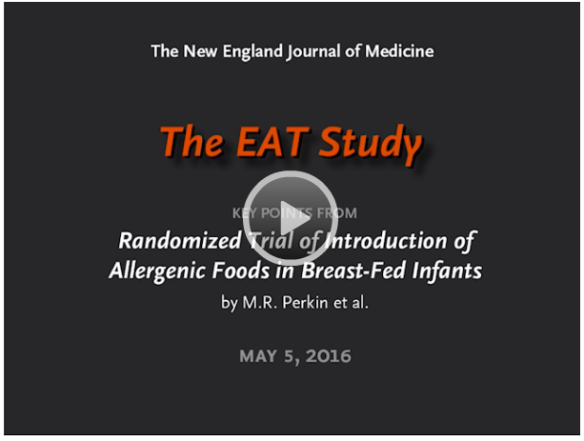