A recent article in USAToday highlights the increasing problem of suicides in U.S.:Suicide rate up 33% in less than 20 years, yet funding lags behind other top killers

Also, at the bottom of this post is more information on the topic of whether we can stop suicide from happening.

An excerpt from USAToday:

“More than 47,000 Americans killed themselves in 2017, the Centers for Disease Control and Prevention … contributing to an overall decline in U.S. life expectancy. Since 1999, the suicide rate has climbed 33 percent.

Americans are more than twice as likely to die by their own hands, of their own will, than by someone else’s. But while homicides spark vigils and protests, entering into headlines, presidential speeches and police budgets, suicides don’t. Still shrouded in stigma, many suicides go unacknowledged save for the celebrities – Robin Williams, Kate Spade, Anthony Bourdain – punctuating the unrelenting rise in suicide deaths with a brief public outcry.

And research suggests our ways of living may be partly to blame, in ways that don’t bode well for the future.

Alcohol and substance abuse are risk factors, and both are increasing. Isolation raises the risk, and nearly half of Americans say they sometimes or always feel alone. Increasing smartphone use has been linked to suicidal thoughts in teens. Even climate change has been found to have roughly the same effect on increasing suicides as an economic recession.” 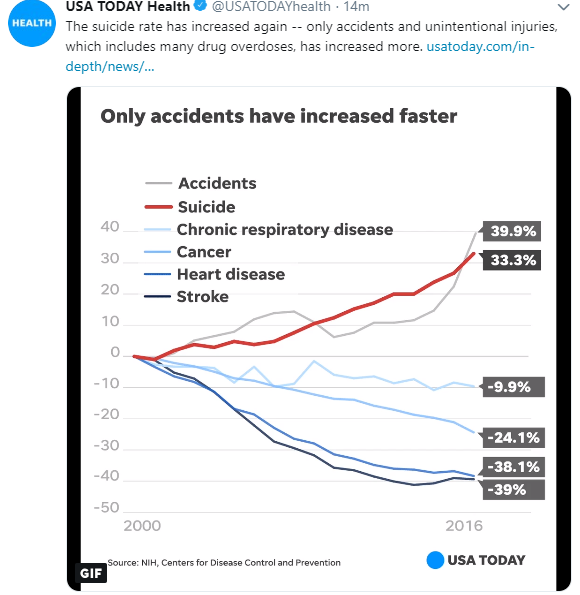 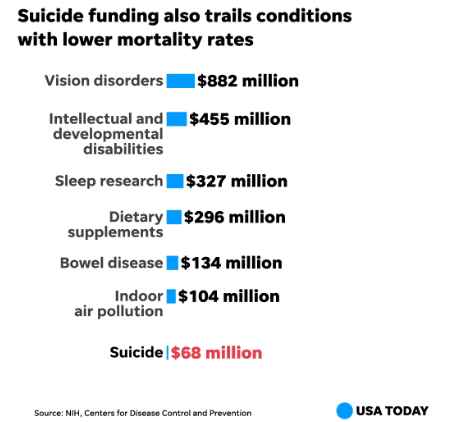 A related commentary from the NY Times: Can We Stop Suicides? details the reasons for suicides and discusses the potential of ketamine as a treatment for depression/suicidality.