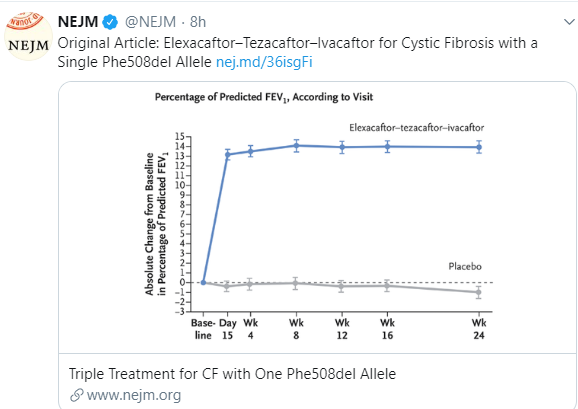 Cystic fibrosis is caused by mutations in the gene encoding the cystic fibrosis transmembrane conductance regulator (CFTR) protein, and nearly 90% of patients have at least one copy of the Phe508del CFTR mutation. In a phase 2 trial involving patients who were heterozygous for the Phe508del CFTR mutation and a minimal-function mutation (Phe508del–minimal function genotype), the next-generation CFTR corrector elexacaftor, in combination with tezacaftor and ivacaftor, improved Phe508del CFTR function and clinical outcomes.

We conducted a phase 3, randomized, double-blind, placebo-controlled trial to confirm the efficacy and safety of elexacaftor–tezacaftor–ivacaftor in patients 12 years of age or older with cystic fibrosis with Phe508del–minimal function genotypes. Patients were randomly assigned to receive elexacaftor–tezacaftor–ivacaftor or placebo for 24 weeks. The primary end point was absolute change from baseline in percentage of predicted forced expiratory volume in 1 second (FEV1) at week 4.

A total of 403 patients underwent randomization and received at least one dose of active treatment or placebo. Elexacaftor–tezacaftor–ivacaftor, relative to placebo, resulted in a percentage of predicted FEV1 that was 13.8 points higher at 4 weeks and 14.3 points higher through 24 weeks, a rate of pulmonary exacerbations that was 63% lower, a respiratory domain score on the Cystic Fibrosis Questionnaire–Revised (range, 0 to 100, with higher scores indicating a higher patient-reported quality of life with regard to respiratory symptoms; minimum clinically important difference, 4 points) that was 20.2 points higher, and a sweat chloride concentration that was 41.8 mmol per liter lower (P<0.001 for all comparisons). Elexacaftor–tezacaftor–ivacaftor was generally safe and had an acceptable side-effect profile. Most patients had adverse events that were mild or moderate. Adverse events leading to discontinuation of the trial regimen occurred in 1% of the patients in the elexacaftor–tezacaftor–ivacaftor group.