W El-Matary et al. Inflamm Bowel Dis 2019; 25: 150-5. This retrospective study of 667 children with Crohn’s disease who were prospectively enrolled in an inception study found that 85 (12.7%) had fistulizing perianal disease. The mean infliximab (pre-fourth dose) was 12.7 mcg/mL in responders compared with 5.4 mcg/mL in the active disease group.  My take: Higher trough levels are desirable in those with fistulizing disease.

LJT Smits et al. Inflamm Bowel Dis 2019; 25: 172-9. In a  prospective cohort with 83 patients with IBD (57 with Crohn’s disease) with at least 2 years of followup, 66% of IBD patients continued CT-P13 after switching from Remicade; two patients developed anti-drug antibodies.  The absolute numbers suggest no adverse impact of a single switch to the biosimilar product.

A Tinsley et al. Inflamm Bowel Dis 2019; 25: 369-76. This study documents the increased risk of influenza and increased influenza complications among IBD patients based on a database cohort of 140,480 patients (with and without IBD). The risk of hospitalization was 5.4% in patients with IBD compared with 1.85% in non-IBD patients.

YY Xu et al. Inflamm Bowel Dis 2019; 25: 261-9. This meta-analysis included 18 nonrandomized controlled trial studies with 1407 patients who received preoperative infliximab and 4589 patients.  The authors showed that preoperative infliximab was not associated with any statistically significant differences for the 2 groups for any complications, reoperation, readmission or mortality.

As an aside, the article starts off with an extremely lengthy disclosure (of financial interests) –more than 30 lines of extremely small font!

The scope of the problem:

My take: This article helps simplify/streamline the approach to this troubling complication.

They used a single local injection of 120 million Cx601, a suspension of allogeneic expanded adipose-derived stem cells, and compared to a placebo injection.  This study comprised 212 patients from 49 centers. The primary endpoint, labelled “combined remission,” was based on absence of draining fistulas and MRI findings.

My take: This local therapy improved outcomes for 1 year after a single injection and appears promising for refractory perianal fistulas.  It may help avoid surgery or systemic immunosuppression.

Closer Look at Data Then Image Below

I am fortunate to work closely with several well-qualified pediatric surgeons and colorectal surgeons.  When faced with perianal fistulas, I have discussions with them to help optimize therapy.  Understanding exactly what and why the surgeons do what they do has not always been clear to me.  Four recent articles provide guidelines for the management of Crohn’s perianal disease.  The color figures in the articles make understanding what is done pretty obvious.

The first guideline provides a summary statement combining aspects of both medical and surgical management.  Basic anatomy and classification are reviewed (a color figure similar to reproduction below helps describe the types of fistula). 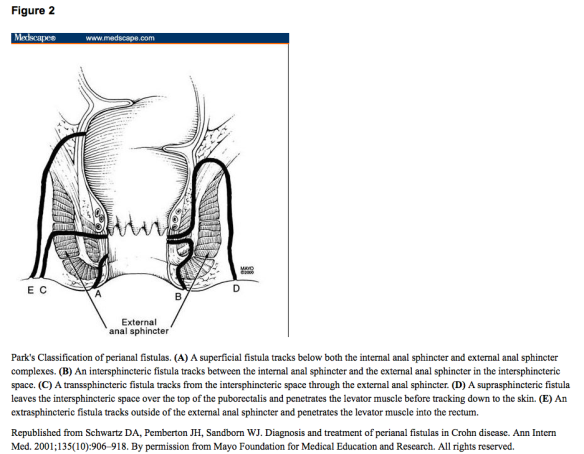 Simple vs Complex fistula is reviewed.  A “Simple fistula is a superficial, intersphincteric or low transspincteric fistula that has only 1 opening and is not associated with an abscess and/or does not connect to an adjacent structure such as the vagina or bladder.”  All others are complex fistulas.  The MRI classifcation is also reviewed (Figure 5).

Bottomline: These set of articles should serve as a useful reference when managing perianal disease.