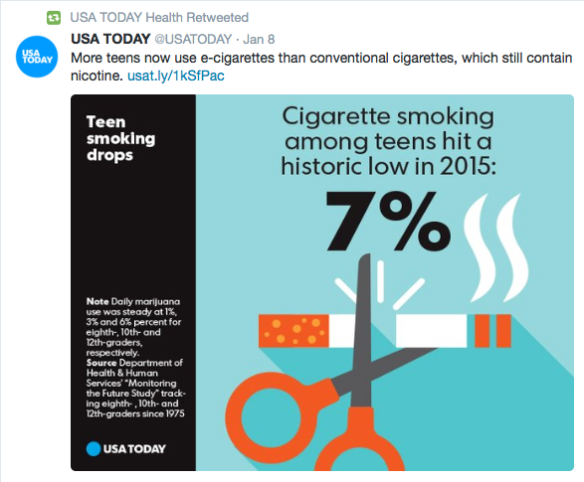 Given the amount of information about the negative consequences of smoking that is currently available, some might say that you would have to be mentally-ill to start smoking.  The good news is that stopping smoking has been associated with improvements in mental health (BMJ 2014; 348: g1151 dii 10.1136/bmj.g1151 -thanks to Mike Hart for this reference).  Free full-text BMJ article PDF

Eligibility criteria for selecting studies Longitudinal studies of adults that assessed mental health before smoking cessation and at least six weeks after cessation or baseline in healthy and clinical populations.

Results 26 studies that assessed mental health with questionnaires designed to measure anxiety, depression, mixed anxiety and depression, psychological quality of life, positive affect, and stress were included…. the standardised mean differences (95% confidence intervals) were anxiety −0.37 (95% confidence interval −0.70 to −0.03); depression −0.25 (−0.37 to −0.12); mixed anxiety and depression −0.31 (−0.47 to −0.14); stress −0.27 (−0.40 to −0.13). Both psychological quality of life and positive affect significantly increased between baseline and follow-up in quitters compared with continuing smokers 0.22 (0.09 to 0.36) and 0.40 (0.09 to 0.71), respectively). There was no evidence that the effect size differed between the general population and populations with physical or psychiatric disorders.

Conclusions Smoking cessation is associated with reduced depression, anxiety, and stress and improved positive mood and quality of life compared with continuing to smoke. The effect size seems as large for those with psychiatric disorders as those without. The effect sizes are equal or larger than those of antidepressant treatment for mood and anxiety disorders.

Figure 2 shows the relationship of the individual studies and the mental health outcomes.  In every study except one, there was improvement in those who quit smoking, though many of the studies had confidence limits that indicated that the results did not meet statistical significance.

Bottomline: This study indicates that quitting smoking can improve rather than worsen mental health.

While “some 6 million [deaths] globally every year and 400,000 in the United States” are tobacco-related, the best way to reduce these statistics is unclear.  Currently, nearly 50 million Americans continue to use some form of tobacco. A couple important ideas are discussed in a few recent perspective articles:

In my view, the most promising idea is “Tobacco 21.”  Starting in May, in New York City, it will be illegal to sell tobacco products and electronic cigarettes to persons younger than 21 years of age.  While the FDA set a national minimum of age 18 years, states and localities can set a higher age.

Although there are those who decry the ‘nanny state’ interfering in adults who are capable of enlisting in the army, there are compelling arguments to ignore these nihilists.

Even though Tobacco 21 is the most logical next step in reducing the dangers of tobacco, a much more visible and controversial measure has been ENDs or electronic nicotine delivery systems.  E-cigarettes have been widely advertised.  The opponents of e-cigarettes object because they have the potential to diminish the stigma of smoking and serve as a gateway product, leading to more smoking (JAMA 2013; 310: 685-6).

On the other hand, advocates suggest that “the majority of e-cigarette users treat them as cessation aides.” Ultimately, these products will improve health only if it helps reduce use of combustible products.

Bottomline: Tobacco 21 has the best potential to reduce the mortality and morbidity of smoking, but ongoing efforts with warning labels, tax increases, clean-indoor policies, cessation programs, and public-service campaigns need to continue.

From NY Times (coverage of Lancet article), those graphic anti-smoking ads seem to be helping.
http://nyti.ms/18RT9Kq

For almost two decades, Lisha Hancock smoked between one and two packs of cigarettes a day…..

Then she saw a graphic television commercial featuring a former smoker, Terri Hall, who developed head and neck cancer. The widely seen advertisement shows Ms. Hall inserting a set of false teeth and placing a small speaker inside a hole in her neck.

“It scared me because I had always had problems with my throat,” said Ms. Hancock, 38, who lives in Kentucky. “When I saw that, it made me realize that there are other types of cancer besides lung cancer, and that really hit home for me.”

The ad prompted her to give up smoking about eight months ago, using a combination of an exercise and healthful eating regimen along with nicotine lozenges, and she has not had a cigarette since. But Ms. Hancock may be just one of thousands of Americans who quit smoking after seeing the commercial featuring Ms. Hall, which was part of a series of antismoking ads put out by the federal government last year. The campaign, called Tips From Former Smokers, was notable both for its raw images and because it marked the first time that the government directly attacked the tobacco industry in paid, nationwide advertisements.

According to a new study published on Monday in The Lancet, the ads may have prompted more than 100,000 Americans to give up smoking for good. (emphasis added by blog)

The study, led by a team at the Centers for Disease Control and Prevention, surveyed 5,300 Americans before and after the campaign, including 3,000 smokers. The paid ads ran for three months beginning in March, just after the New Year resolution season, when the percentage of smokers trying to quit is typically on the decline.

The researchers found that over all, four of five of smokers had seen the commercials, and the percentage who reported trying to quit rose by 12 percent. Of those who tried to quit, about 13 percent remained abstinent after the campaign had ended.

Using census data, the researchers estimated that as many as 1.6 million smokers nationwide attempted to quit as a result of the ad campaign. Most smokers require several attempts before they give up cigarettes for good, so only a fraction of those who were motivated by the campaign would have succeeded. The ads were expected to spur about 50,000 smokers to quit permanently, but the Lancet study estimated that twice that number were successful….

Historically, about half of the nation’s 45 million smokers try to quit every year, and yet cessation rates hover around 5 percent annually. Public health officials have long been telling smokers that cigarettes shave years off your life, contributing to more than 400,000 deaths every year.

The new campaign went in a different direction, focusing not on death but on quality of life. The creators of the campaign used focus groups and feedback from smokers to develop sobering ads showing real smokers with amputations, paralysis and disfigurement from heart and lung surgeries.

“I think the fact that you may die is not highly motivating to people,” Dr. Frieden said. “The fact that the remainder of your life may be very unpleasant is, and that’s what the data shows. Not only do smokers die about ten years younger than most people, but they feel about ten years older than their age.”

The campaign last year cost about $54 million and was paid for by the Affordable Care Act. …. Dr. Frieden said the money, which is only a fraction of the $8 billion the tobacco industry spends on marketing and promotion every year, was well spent.

“This is a campaign that has literally saved tens of thousands of lives,” he said. “We would like to be able to have hard-hitting campaigns like this on the air year round. The tobacco industry spends what we spent on this campaign in three days.”

“The time is always right to do what is right.”  Martin Luther King

In the first article, the authors reviewed smoking-cessation histories from 113,752 women and 88,496 men.  All participants were older than 25 years and interviewed between 1997-2004.  These participants were from a cohort in U.S. National Health Interview Survey (NHIS).  The NHIS is a nationally representative cross-sectional health survey.

What were the key findings?

2. Smokers mortality worsened compared to the general population over a 50-year period. During the three time periods (1959-65, 1982-88, 2000-10), the mortality dropped by 50% in the overall study population.  However, female smokers mortality remained unchanged and male smokers experienced only a 24% reduction.

Specific hazard ratios (HR) for a large number of conditions are detailed in these studies.  For example, among men, the HR for death due to lung cancer was 24.97 in the contemporary cohort.  Due to the nature of these large cohorts, there are many limitations and it is difficult to draw conclusions about a specific threshold in terms of amount of smoking.  However, the conclusions may actually underestimate the effects of smoking due to undersampling of certain high risk populations, like incarcerated persons and those with mental illness.

The editorial notes that more women die from lung cancer than breast cancer.  Yet, due to smoking’s stigma, there are no ‘race for the cure’ promotions.  In addition, increasingly smoking is a behavior concentrated in persons of lower social status.  As such, it “risks becoming invisible to those who set health policies and research priorities.”

Even Nick Naylor might consider a career change if he read these studies (Thank You for Smoking (film) – Wikipedia, the free encyclopedia).

Add two more cancer risks for tobacco smoke (Gastroenterology 2012: 142: 233-40, 242-47).  There is now evidence linking tobacco smoke to 18 different cancers and tobacco smoke is probably the most preventable cause of death in the world.

In the first study, the investigators examined 3167 patients with Barrett’s esophagus.  This retrospective study followed patients for 7.5 years.  Patients who were current smokers (any form of tobacco) had double the risk of developing high-grade dysplasia or cancer compared to those who had never smoked.  Former cigarette smokers had a hazard ratio of 1.53.

In the second study, 386 patients with Lynch syndrome were analyzed during a 10 month period.  The hazard ratio for developing colorectal adenomas was 6.13 for current smokers and 3.03 for former smokers compared with patients who never smoked.  In addition, the authors identified a trend for developing adenomas based on pack-years.

Two more reasons to quit smoking.  On a side note, my grandmother said quitting smoking was the easiest thing that she ever did.  So easy, she did it a thousand times.