The authors performed a retrospective study with 434 subjects from the ALF study group who met criteria for either ALF (coagulopathy and hepatic encephalopathy w/in 26 weeks of first symptoms) or Acute Liver Injury (ALI) (severe liver injury with coagulopathy but no encephalopathy).  In this group, all of the patients had liver disease attributed to acetaminophen (APAP) toxicity.

My take: This study shows that APAP levels are unreliable in determining APAP ingestions and not predictive of ALF.  The use of N-acetylcysteine should not be determined by APAP levels in patients with suspected overdose.

Disclaimer: These blog posts are for educational purposes only. Specific dosing of medications/diets (along with potential adverse effects) should be confirmed by prescribing physician/nutritionist.  This content is not a substitute for medical advice, diagnosis or treatment provided by a qualified healthcare provider. Always seek the advice of your physician or other qualified health provider with any questions you may have regarding a condition

Although I was unable to attend this year’s liver symposium at NASPGHAN19, I reviewed the lecture notes.  There is some terrific content.  Here are some of the slides (borrowed with permission from NASPGHAN).

Keynote Speaker: Outcomes for the future: How do we improve on the status quo? Ronald J. Sokol, MD, FAASLD, Children’s Hospital Colorado  (SLIDES NOT AVAILABLE in onliine handout) 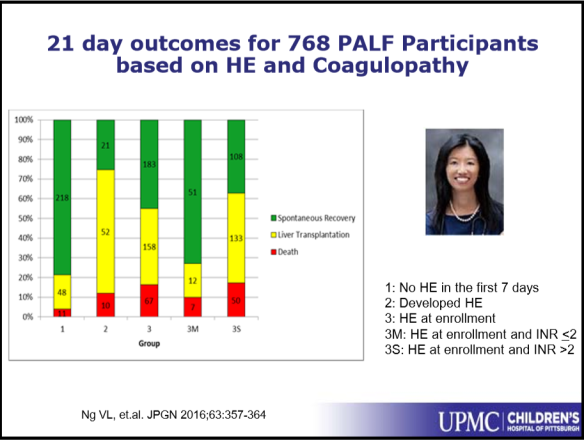 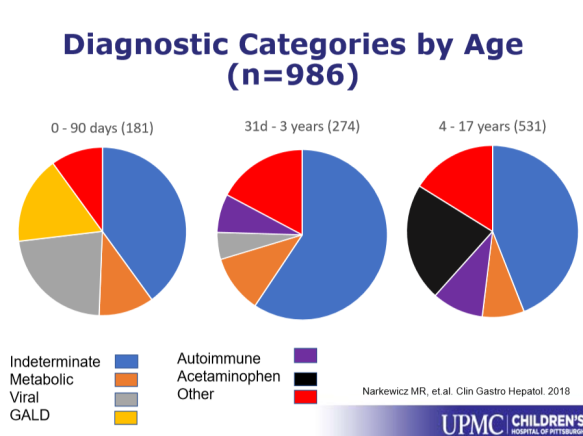 Should I offer treatment for my patients with Hepatitis B or Hepatitis C? Regino P. Gonzalez-Peralta MD, AdventHealth for Children

This lecture describes a lot of the emerging pharmacologic treatments; none of these are currently recommended.

A recent case series (Li H, A Diaz-Kuan, M Vos et al. Mol Genet Metab. 2018 Apr;123(4):428-432) highlights the importance of dietary history in infants with liver failure (abstract below).  Congratulations to my colleague Miriam Vos one of the coauthors.

Commentary on this publication from Emory News (from Kipp Ellsworth’s twitter feed):

Babies with inherited intolerance of fructose face a risk of acute liver failure if they are fed certain widely available formulas containing fructose, pediatricians and geneticists are warning. Baby formula manufacturers should remove fructose or sucrose, or explicitly label their products to allow parents to avoid those sweeteners if necessary, the doctors say.

In a recent paper in Molecular Genetics and Metabolism, Emory geneticists Hong Li, MD, PhD and Michael Gambello, MD, PhD together with Children’s Healthcare of Atlanta pediatric hepatologist Miriam Vos, MD and colleagues report four cases of hereditary fructose intolerance (HFI), all diagnosed in early infants. All had acute liver failure that resolved when the infants switched to formula without fructose.

HFI is estimated to occur in 1 out of 20,000 live births. It comes from mutations in the aldolase B gene, resulting in an inability to metabolize fructose. Early symptoms include nausea, vomiting, abdominal pain and failure of an infant to gain weight. If unrecognized, HFI can result in liver and kidney damage, seizures or death.

HFI-related problems do not appear if an infant is being breastfed exclusively. It is normally recognized when fructose-containing solid foods, such as fruit, are introduced into the diet several months after birth. However, some baby formulas – often soy-based – contain sweeteners such as high-fructose corn syrup or sucrose (table sugar), which is made of fructose and glucose linked together. Sometimes, the label only says “sugar” instead of sucrose…

Since HFI is a treatable disease, Li urges pediatricians to consider HFI as a potential diagnosis if there is a feeding problem, elevated transaminase enzymes or jaundice (a sign of liver damage) and the infant has been fed formula containing fructose or sucrose.

Some information about a young patient’s condition can be obtained from urine carbohydrate tests, but the only way to confirm HFI is by genetic sequencing.

Hereditary fructose intolerance (HFI) is an autosomal recessive disorder caused by aldolase B (ALDOB) deficiency resulting in an inability to metabolize fructose. The toxic accumulation of intermediate fructose-1-phosphate causes multiple metabolic disturbances, including postprandial hypoglycemia, lactic acidosis, electrolyte disturbance, and liver/kidney dysfunction. The clinical presentation varies depending on the age of exposure and the load of fructose. Some common infant formulas contain fructose in various forms, such as sucrose, a disaccharide of fructose and glucose. Exposure to formula containing fructogenic compounds is an important, but often overlooked trigger for severe metabolic disturbances in HFI. Here we report four neonates with undiagnosed HFI, all caused by the common, homozygous mutation c.448G>C (p.A150P) in ALDOB, who developed life-threatening acute liver failure due to fructose-containing formulas. These cases underscore the importance of dietary history and consideration of HFI in cases of neonatal or infantile acute liver failure for prompt diagnosis and treatment of HFI.

This article provides a very good overview of this topic starting withe diagnosis, epidemiology and proceeding to specific management issues/outcomes. 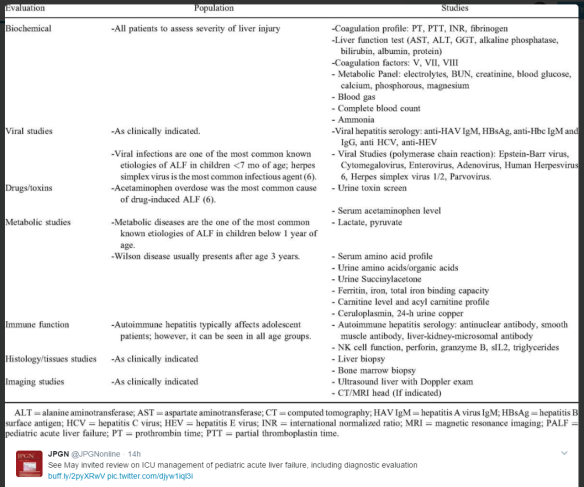 My take (from authors): “Despite recent advances in supportive care and the improvements in outcomes observed…the practical intensive care management of PALF remains poorly defined…Current treatment options are merely supportive and based on incomplete adult data and local institutional experience.”

NR Santucci et al. JPGN 2017; 64: 186-93.  This systematic review selected 31 studies (out of 916 citations) and found there is no consensus concerning diagnostic criteria for biliary dyskinesia and the data supporting the concept of biliary dyskinesia in children is weak.  The uncontrolled studies were generally observational, retrospective designs with relatively small numbers.

I Youngster et al. J Pediatr 2017; 182: 239-44.  This study examined large prescription databases (more than 74 million person years) and identified wide discrepancy in antibiotic use among the six different countries.  For example, among children less than 2 years of age, South Korea had the highest rate of antimicrobial use, with 3.41 prescribed courses per child-year; in contrast, the rates were 1.4 in Italy, 1.5 in Spain, 1.1 in the U.S., 1.0 in Germany, and 0.5 in Norway.

A Srivastavai et al. JPGN 2017; 64: 194-9. In this retrospective study with 262 children with liver disease-related ascites, the authors found spontaneous bacterial peritonitis (or culture-negattive neurocytic ascites) in 28.6%. Half of these patients were asymptomatic.  SBP/CNNA was defined by having a polymorphonuclear leukocyte count of >250 cells/mm3.  There was a 24% one-year mortality rate for those who had SBP/CNNA. 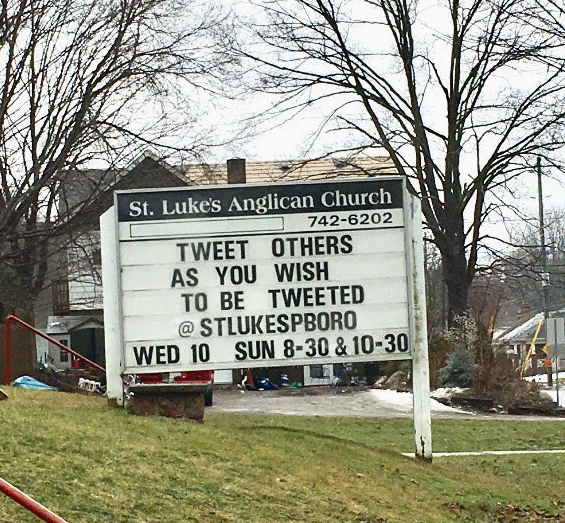 from Twitter’s ‘This Week in Church Signs’ feed

This blog entry has abbreviated/summarized the presentations. Though not intentional, some important material is likely to have been omitted; in addition, transcription errors are possible as well.  I’ve attached the course syllabus as well:

Is pediatric disease the same disease as in adults? 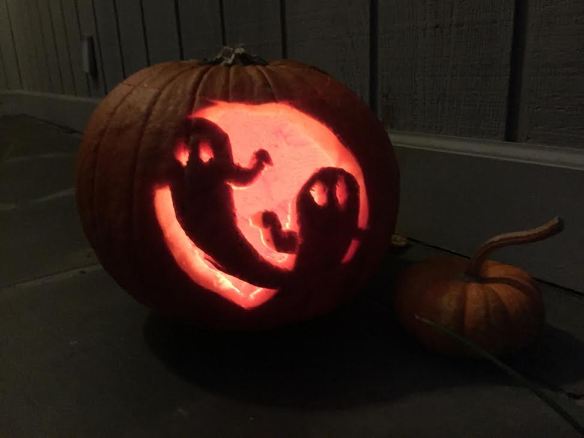 Later this week, our national pediatric GI meeting (North American Society for Pediatric Gastroenterology Hepatology and Nutrition) is starting in Atlanta.  Many in my group are involved and presenting.

The following link (with permission from NASPGHAN) is to the website with links to all of these lectures:

Also, to plan your meeting -go to NASPGHAN home page and use mobile guidebook: NASPGHAN 2014 has gone mobile using Guidebook!

A recent study shows that a significant number of patients with Ornithine Transcarbamylase Deficiency (OTCD), which is the most common urea cycle defect (UCD), can present with significant hepatic involvement and even acute liver failure (ALF) (J Pediatr 2014; 164: 720-25).

This retrospective study reviewed 71 patients with OTCD at 2 centers.  Longitudinal data collected over 10 years was analyzed.

“Although the urea cycle enzymes are active in the liver, standard liver function generally has been considered to be largely unaffected in UCD.”   This study shows that this concept is mistaken.OTCD has been viewed mainly as a disorder that presents with marked hyperammonemia in the newborn period.  However, there is variable clinical expression and some may remain asymptomatic throughout their lifetime.

Take-home message: Check plasma amino acids, urine organic acids and urine orotic acids when patients do not have an established etiology for hepatic dysfunction, including ALF.

As anyone who follows this blog knows, I really like good acronyms.  MARS which stands for molecular adsorbents recirculating system is another good one.  Data regarding the use of MARS for acute liver failure (ALF) due to Wilson disease in children has been recently reported (JPGN 2014; 58: 160-64, editorial 140-41).

The present study with only four children is not terribly informative.  However, both the article and the editorial provide references on small randomized controlled trials which concur with the conclusions of the authors that “biological and clinical improvement is demonstrated in the MARS treatment group compared with the standard medical treatment group.”  Yet, recent large multicenter randomized controlled trials are inconclusive with regard to whether MARS improves survival.

Bottomline (from editorial): “MARS does not prevent transplantation, and survival outcome post transplantation is unclear.  There is no robust evidence to justify the financial implications of this intervention in a clinical setting. The present role of MARS remains within the research setting.”