Here are direct links to 3 of the articles:

“This makes a strong case for not only ‘the lower the better’ but also for ‘the younger the better” as atherosclerotic disease is determined not only by the LDL level but also by cumulative exposure.

My take: This study provides convincing data that statin therapy prolongs health and life in patients with familial hypercholesterolemia.

Over the last few years, I have posted a couple blogs on aspirin.  While this topic is not a frequent concern in the pediatric population, it is often a concern for those caring for this population. 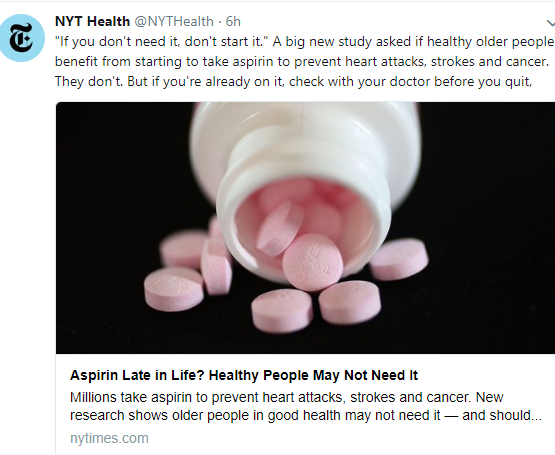 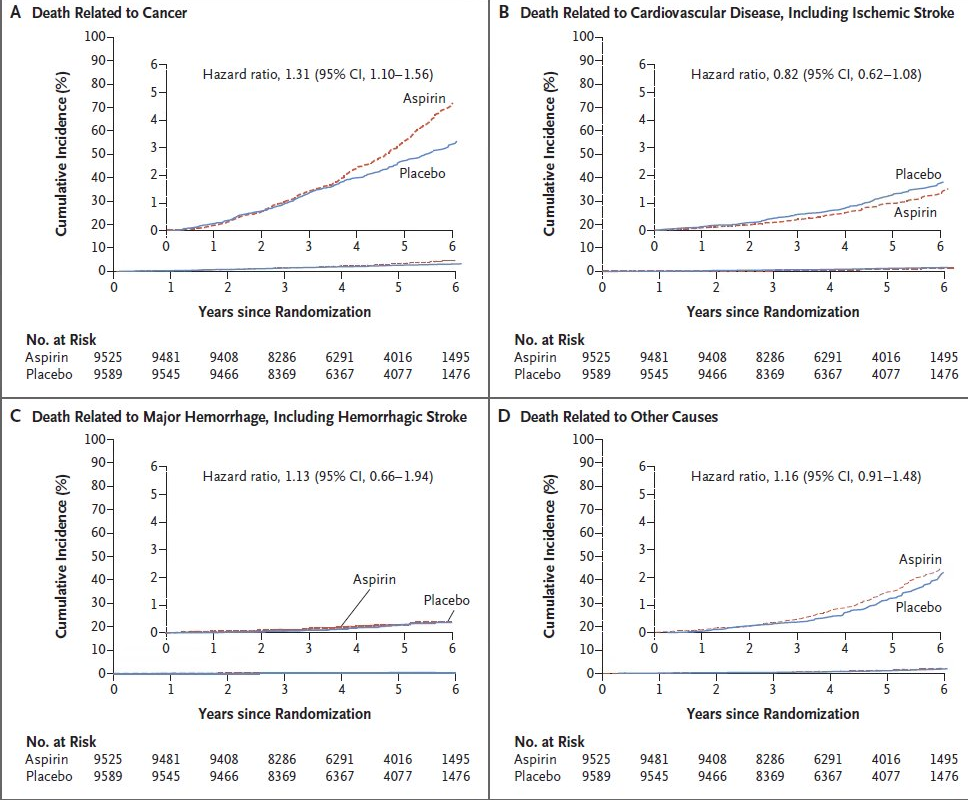 The authors note that these studies have shown only weak associations & were likely a matter of reverse causation due to the low sodium group having increased numbers of participants with numerous health issues (eg diabetes, hypertension, chronic illness and cardiovascular disease).

By looking at these results based on “Hill’s Criteria” to assess whether an association is causal, the authors show that the association of low sodium intake and cardiovascular disease indicates that this association is NOT causal.

The authors note that population exposure to sodium correlates better than individual exposure, perhaps due to measurement issues. Key points:

My take: If we are to take advantage of the science to reduce cardiovascular deaths, we need to convince manufacturers and restaurants to reduce sodium.

Probably like a lot of people, I presumed that the main way that exercise improved cardiovascular outcomes was due to beneficial effects on weight, serum lipid levels, and adiposity. However, recent research (Liu X et al. Cell Metab 2015; 21: 584-95) has shown a critical role for microRNA miR-222.  This research is summarized by Hill JA (“Braking Bad Hypertrophy” NEJM 2015; 372: 2160-62).

Bottomline: “Exercise is a powerful medicine with few noorthopedic side effects.”

Methods: Cardiovascular events occurring in patients in the greater Munich area were prospectively assessed by emergency physicians during the World Cup. We compared those events with events that occurred during the control period: May 1 to June 8 and July 10 to July 31, 2006, and May 1 to July 31 in 2003 and 2005.

Results: Acute cardiovascular events were assessed in 4279 patients. On days of matches involving the German team, the incidence of cardiac emergencies was 2.66 times that during the control period…On those days, the highest average incidence of events was observed during the first 2 hours after the beginning of each match.

Conclusions: Viewing a stressful soccer match more than doubles the risk of an acute cardiovascular event.

Take-home point: Some people are not lying when they say they live and die with their favorite team.

A recent review “Extrahepatic Complications of Nonalcoholic Fatty Liver Disease” (NAFLD)(Hepatology 2014; 59: 1174-97) seems to position the liver as the center of a multitude of problems rather than one of many associated problems.

It is known that NAFLD increases the risk of end-stage liver disease and hepatocellular carcinoma.  However, the majority of deaths among individuals with NAFLD are attributed to cardiovascular disease and malignancy.  This lengthy review describes in great detail the associations between NAFLD and the risk of developing cardiovascular disease (CVD), type 2 diabetes mellitus (T2DM), chronic kidney disease (CKD), and colorectal neoplasm.  The presence of NAFLD appears to convey an independent increase in risk for these conditions.

Take-Home Message: NAFLD has independent associations for greater risk of CVD, hyperglycemia, and malignancy.  Whether these associations are simply an epiphenomenon  of more aggressive metabolic syndrome or whether the liver injury primarily causes these additional risks remains unclear.

The author quotes one of her patients who when asked what is the number-one killer of women, replies “I know the right answer is heart disease…but I’m still going to say ‘breast cancer.'”

A graphic from this perspective article shows that mortality from cardiovascular disease is approximately ten times greater than mortality from breast cancer (if difficult to see, the graphic is available online http://www.nejm.org/doi/full/10.1056/NEJMp1314638?query=featured_home): 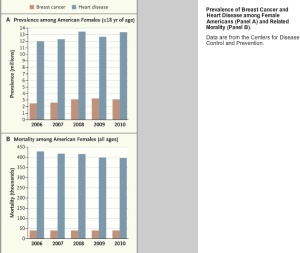 In pediatric GI, families are often more worried about the treatment than the disease (e.g.. inflammatory bowel disease), despite the fact that the disease is often far more dangerous.

Take home message: (quote from author) “If we want our facts to translate into better health, we may need to start talking more about our feelings.” This is true not just in cardiovascular disease, but in all aspects of medicine.

The idea that there are obese people who are nonetheless healthy may be a myth.

Although some overweight or obese people have normal cholesterol, glucose levels and blood pressure — elements of so-called metabolic health — a new study suggests that obesity by itself increases the risk for heart disease, stroke, diabetes and death.

Researchers analyzed 12 studies that had together followed more than 61,000 adults, most for at least 10 years. About 9 percent of the subjects were obese and metabolically healthy — that is, they had normal LDL, HDL and total cholesterol, along with healthy blood pressure and blood sugar levels. The report was published online last week in Annals of Internal Medicine.

Compared with metabolically healthy people of normal weight, the obese group had a 24 percent increased risk for fatal and nonfatal cardiovascular events like heart attack and stroke, and for death by any cause.

Resistin is a cysteine-rich protein which is often elevated in chronic renal disease and has been associated with increased risk for cardiovascular disease (CVD) (J Pediatr 2012; 161: 276-80).  It is expressed primarily in macrophages and stimulates the production of interleukin 6, and tumor necrosis factor α (TNF-α).

The cited study examined whether resistin was associated with renal function and inflammatory markers in 319 children from the Chronic Kidney Disease in Children (CKiD) cohort.  The CKiD study is a longitudinal observational study from 46 pediatric nephrology centers in North America.  For this study, the glomerular filtration rate (GFR) had to between 30-90 mL/min/1.73 m-squared.