There have been some recent terrific advances in pharmacology –a few that come to mind:

The one common feature is that these are all very expensive; there are many other expensive medications with less benefit.  Given the rise in costs of these medications, there is a need to do a better job in getting good value in our drug costs.  A potential path forward is outlined in a recent commentaries (SB Dusetzina, J Oberlander. NEJM 2019; 381: 2081-4; PB Bach. NEJM 2019; 381: 2084-6).

In the second commentary, Dr. Bach notes that drugs that have too little evidence to support full approval and those that are ‘too late in their life cycle’ both should have their pricing negotiated by the government.  This would side step some of the arguments about undermining the incentive for new drug development.

My take: While current partisanship makes reaching agreement difficult, targeting soaring pharmaceutical costs is one area in which I predict common ground can be found.  While many are going to benefit from the therapeutic advances listed above, there are other medications which are overpriced and should be negotiated like in other high-income countries.

The average cost of a branded cancer drug in the U.S. is around $10,000 a month, double the level a decade ago

Pfizer’s multistep pricing process shows drugmakers don’t just pick a lofty figure out of the air. At the same time, its process yielded a price that bore little relation to the drug industry’s oft-cited justification for its prices, the cost of research and development.

Instead, the price that emerged was largely based on a complex analysis of the need for a new drug with this one’s particular set of benefits and risks, potential competing drugs, the sentiments of cancer doctors and a shrewd assessment of how health plans were likely to treat the product…

In 2013, Pfizer hired outside firms to conduct hourlong interviews with more than 125 cancer doctors in six cities…

Pfizer employees say the mock reviews supported a monthly price below $10,000. If it was higher, insurers could start requiring doctors to fill out paperwork justifying its use.

My take: This article makes clear that the driver of higher pharmaceutical prices is based on a shrewd assessment of what the market will bear.

Some readers took issue with my pessimism with probiotics in terms of their effectiveness for several conditions, their safety and the number needed to treat (NNT). It is noted that the number needed to treat (NNT) with probiotics is better than with many other conditions.  For example, the NNT for benefit with the influenza vaccine, Tamiflu for influenza, and mammography for preventing breast cancer are much worse than the NNT for benefit with probiotics for conditions like NEC, antibiotic-associated diarrhea, Clostridium difficile infection, and ulcerative colitis (with VSL#3). If one looks at multiple posts from this blog, there are plenty of posts supporting the use of probiotics (see some of the links yesterday or search “probiotics” on this blog.  Thus, it is important to not overlook the benefits of probiotics for many conditions and to not take a single study and extrapolate too much.

Now for today’s post -perhaps it will stir as much interest:

I must admit I’m fascinated with the way pharmaceutical companies operate and the creative ways they find to magnify their profits.  In previous posts, I’ve detailed how pharmaceutical companies will try to corner the generic market, increase the cost of liquid medicines, and package drugs in a way to force the purchase of additional vials of medicine among other tactics.  Now, a commentary (R Feldman, C Wang. NEJM 2017; 376: 1499-1501) details how pharmaceutical companies have increasingly used “the citizen-petition process that the Food and Drug Administration (FDA) implemented in the 1970s.”  This process was designed as “a way to voice concerns” by individual citizens.

Yet, this pathway is now being used to delay competition/entrance of generic drugs, mainly with frivolous claims.  In most cases, companies file these claims at the end of the approval process, almost always as a delaying tactic.  Approximately 80% of these actions by competitor drug companies are denied by the FDA.

Ultimately, these actions could be countered with antitrust actions; this, in fact, has occurred with Shire ViroPharma.  On February 7, 2017, the Federal Trade Commission filed an antitrust action “alleging that the company abused regulatory processes by filing 43 submissions with the FDA (including 24 meritless citizen-petition filings within one docket) in an effort to hold off generic competition for its gastrointestinal drug Vancocin (vancomycin).”  However, antitrust actions are typically difficult to pursue and expensive.

My take: I think these tactics (and others) will undermine the relationship of pharmaceutical companies with consumers. While their stock holders may see benefits in the short term, I expect that other stake holders will fight back.  There are several targets in that endeavor, including ending limits on Medicare negotiating for better prices.

A recent letter to the editor (LA Probst, TR Welch. NEJM 2017; 376: 795-6) provides a sad tale of how well-intended legislation to promote safety and efficacy of pediatric liquid medications has led to both an increased number of liquid formulations approved by the FDA but with a much higher cost than previous extemporaneously compounded formulations.

The liquid version of lisinopril is priced 775 times the cost of the equivalent tablet.  Other medications with high liquid to tablet cost ratios include enalapril (21 times), indomethacin (49 times), glycopyrrolate (14 times), and pyridostigmine (11 times).

The authors note that there are additional costs for developing/manufacturing these liquid formulations.

My take (borrowed from the authors): “there must be a better way to support the costs of developing the drug formulations that many children and some severely impaired adults desperately need.”

Did you know that Remicade and Humira are orphan drugs?  For those concerned about pharmaceutical costs, a recent NPR article is a must.

Yet a Kaiser Health News investigation shows that the system intended to help desperate patients is being manipulated by drugmakers to maximize profits and to protect niche markets for medicines already being taken by millions. The companies aren’t breaking the law but they are using the Orphan Drug Act to their advantage in ways that its architects say they didn’t foresee or intend. Today, many orphan medicines, originally developed to treat diseases affecting fewer than 200,000 people, come with astronomical price tags…

More than 70 were drugs first approved by the Food and Drug Administration for mass market use. These medicines, some with familiar brand names, were later approved as orphans. In each case, their manufacturers received millions of dollars in government incentives plus seven years of exclusive rights to treat that rare disease, or a monopoly…

When a drugmaker wins approval of a medicine for an orphan disease, the company gets seven years of exclusive rights to the marketplace, which means the FDA won’t approve another version to treat that rare disease for seven years, even if the brand name company’s patent has run out. The exclusivity is compensation for developing a drug designed for a small number of patients whose total sales weren’t expected to be that profitable…

My take: Any objective observer would recognize that the goals of the Orphan Drug Act are being subverted by current practice and changes are needed to achieve the goals of targeting rare diseases and reasonable medication costs. 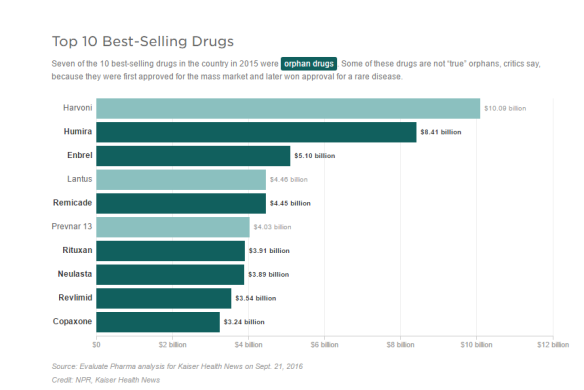 The federal Medicare program and private health insurers waste nearly $3 billion every year buying cancer medicines that are thrown out because many drug makers distribute the drugs only in vials that hold too much for most patients, a group of cancer researchers has found…

If drug makers distributed vials containing smaller quantities, nurses could pick the right volume for a patient and minimize waste…according to researchers at Memorial Sloan Kettering Cancer Center, whopublished a study on Tuesday in BMJ…

“Drug companies are quietly making billions forcing little old ladies to buy enough medicine to treat football players, and regulators have completely missed it,” said Dr. Peter B. Bach, director of the Center for Health Policy and Outcomes at Memorial Sloan Kettering and a co-author of the study…

Some non-cancer drugs also generate considerable waste, includingRemicade, an arthritis drug sold by Johnson & Johnson for which an estimated $500 million of the drug’s $4.3 billion in annual sales comes from quantities that are thrown away, researchers found.

My take: this is another indictment of our pharmaceutical companies willful neglect of medication costs or cynical manipulation of our healthcare system. 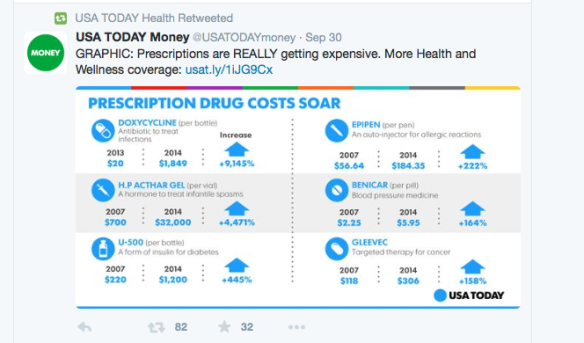 If you want to see how much is reported for each doctor, check out the ProPublica Dollars for Doctors database.

The article notes that the a close relationship between doctors and pharmaceutical companies is important.  “Collaboration between physicians and biopharmaceutical professionals is critical to improving the health and quality of life of patients.”

Take-home point: Some financial relationships between doctors and pharmaceutical companies lead to important improvements in drug (or device) development; other relationships may alter prescribing habits without apparent patient benefit. Will this information empower patients to ask why their physicians has close ties to the pharmaceutical industry?

One of my colleagues recently shared a youtube link that I recommend highly to anyone who is concerned about the relationship between pharmaceutical companies and physicians.  As with any good piece of satire, it is both funny and thought-provoking.  As one would question the impartiality of politicians who receive funds from constituents with a specific agenda, likewise patients may question whether physicians are unduly influenced by their relationship with pharmaceutical companies.

For those too busy to enjoy the entire ~17 minutes, watch the last three minutes: