A recent prospective study (DA Katzka et al. Am J Gastroenterol 2017; 112: 1538-44 -thanks to Ben Gold for this reference) provided more information regarding the potential utility of the cytosponge for eosinophilic esophagitis (EoE); the cytosponge has been studied for Barrett’s esophagus.

Background: 86 adult patients were recruited; 6 could not swallow sponge.  In the remainder, 105 procedures were performed comparing the cytosponge to standard endoscopic biopsies. The cytosponge technique can be completed in ~5 minutes without sedation. “All that is required is centrifuging the cytosponge specimen in its preservative to create a pellet followed by routine paraffin embedding and processing.”

The sensitivity of 75% is likely due to inadequate contact between cytosponge and esophageal wall which could be related to technique, especially in those with a normal caliber esophagus.

My take: The cytosponge appears to identify active EoE in the majority of adult patients.  In those with abnormal cytosponge, the likelihood of active EoE would be very high; as such, it could be a useful biomarker.  It is still probable that many with normal cytosponge result would need endoscopy due to suboptimal sensitivity. 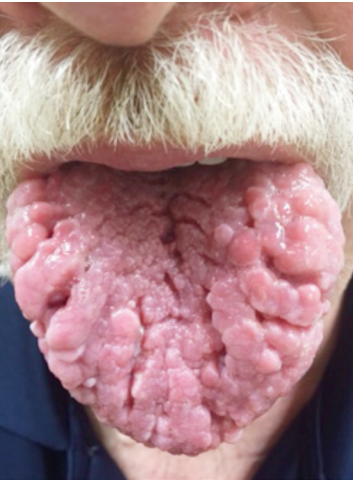 NEJM 2017; 377: e22. In this patient with lingual papillomas, hx/o melenoma, and both hyperplastic and adenomatous polyps, a genetic mutation identifying Cowden syndrome was identified.

I glanced at the guideline –it is about 40 pages in length.  It provides a lot of in-depth information on these infrequent disorders.

Some online resources for similar information: