Currently I am vice chair for the section of nutrition at the Georgia Chapter of the American Academy of Pediatrics; Dr. Tanya Hofmekler is now chair of the section.  I recently attended a Board Meeting which received reports from a number of committees.  One of the presentations from Dr. Evan Anderson (infectious disease specialist), provided an update on the coronavirus, the flu, and other emerging infections.

Satire from The Onion 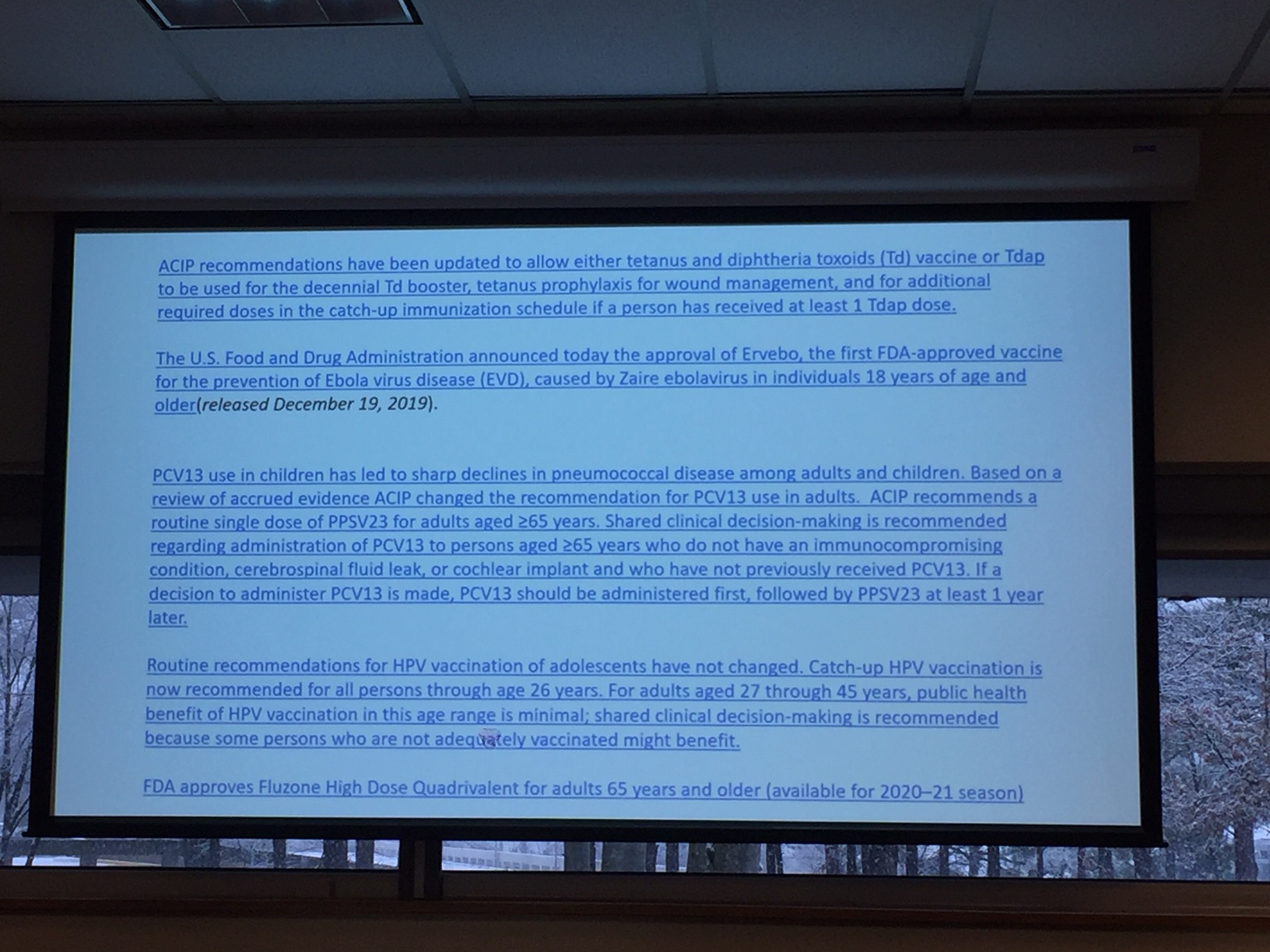 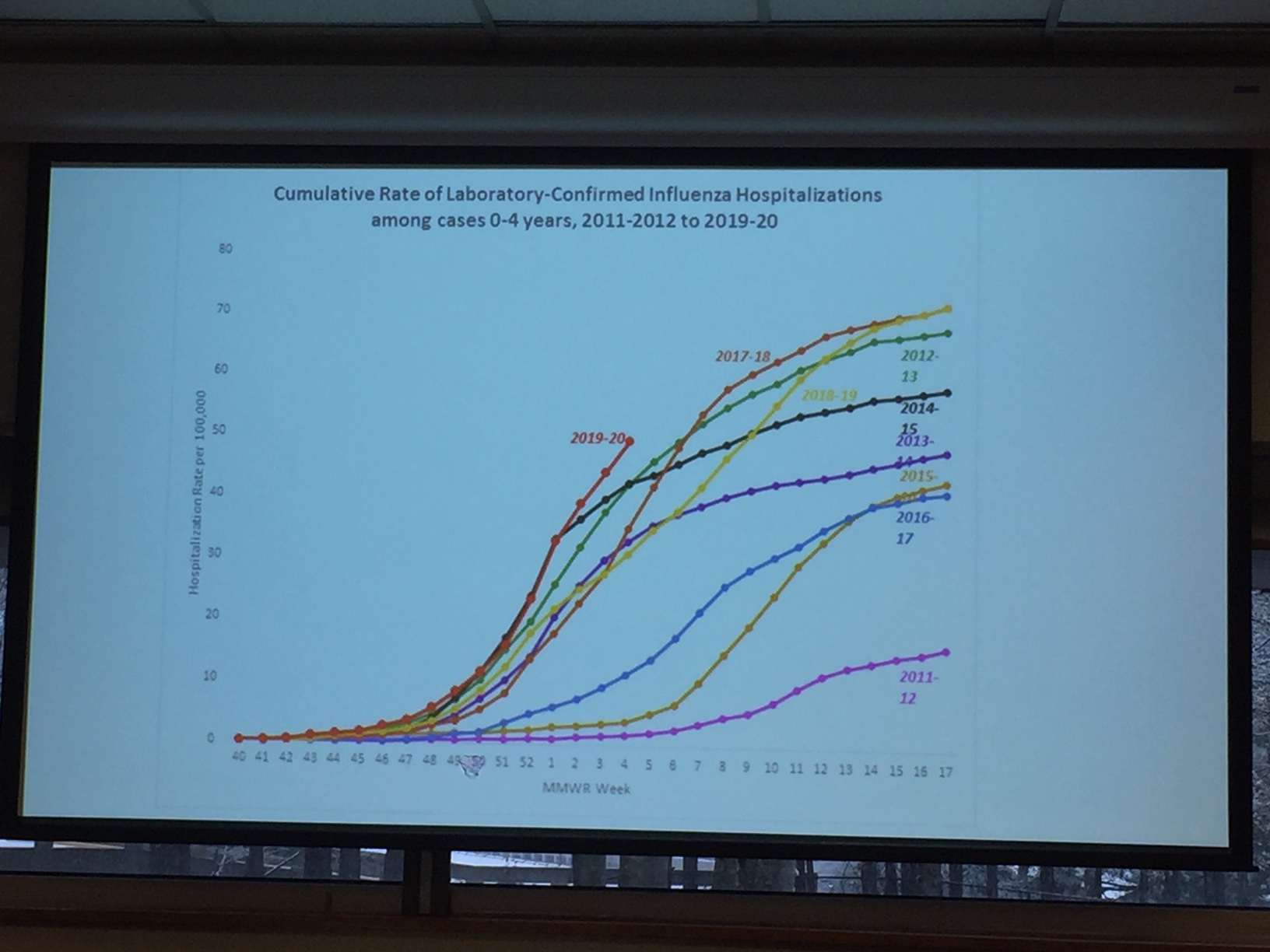 Two recent studies indicate that vedolizumab is performing better than expected in the “real world.”

This study indicates that, overall, patients treated in the first era were likely more sick and less likely to respond to vedolizumab.  The authors’ note that this could be a ‘warehouse effect’ whereby “patients treated within the first year of a drug’s approval are likely representative of a select group of high-risk patients who are refractory to currently available therapies and are being warehoused on ineffective and undesirable therapies (ie. chronic steroid) to bridge them through until a promising agent is approved by the FDA.”

In the second study, the authors retrospectively examined 650 patients with CD and 437 with UC who were treated between 2014-16.  Patients who had a more recent diagnosis of CD (≤2 years) fared better than those with more long-standing disease.

My take: Taken together, these studies indicate that vedolizumab in the real world may outperform the results of the landmark studies which helped garner FDA approval.  In patients who are less sick and have not been considered refractory to multiple treatments, response rates to vedolizumab are higher.

Last year’s deadly flu was likely due in part due to a low rate of vaccination.

From NPR: 5 Reasons Why You Need the Flu Shot

Last year “more than 80,000 people died from flu-related illnesses in the U.S. — the highest death toll in more than 40 years.” So 5 reasons to get your shot:

People 65 and older are at higher risk of flu-related complications, but the flu can knock young, healthy people off their feet, too. It does every year.

2. Getting a flu shot is your civic duty.

“Nobody wants to be the dreaded spreader,” says Schaffner. But everybody gets the flu from somebody else.

After last winter’s severe season, some people are skeptical. They say: “I got the flu shot, but I still caught the flu.”

4. Pregnant women who get the flu shot protect their babies from flu.

Women who are pregnant should be vaccinated to protect themselves. The vaccine also offers protection after babies are born

5. You cannot get flu from the flu vaccine.

It’s still a common misperception: the idea that you can get the flu from the flu shot. 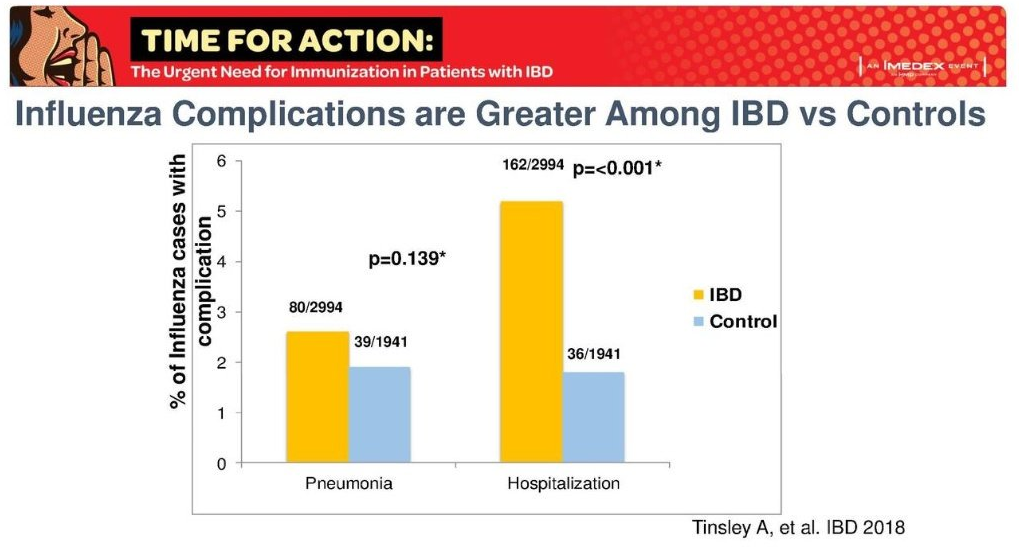 My take (borrowed): “”If it were a military weapon [threat], the response would be to de everything possible to develop countermeasures.  In the case of biologic threats, that sense of urgency is lacking.  But the world needs to prepare for pandemics in the same serious way.”

As usual, I learned a great deal from our recent governing board meeting of the Georgia Chapter of the American Academy of Pediatrics ((AAP).   Here are some notes, including nutrition committee notes at the bottom of this post. Though not intentional, some important material is likely to have been omitted; in addition, transcription errors are possible as well. 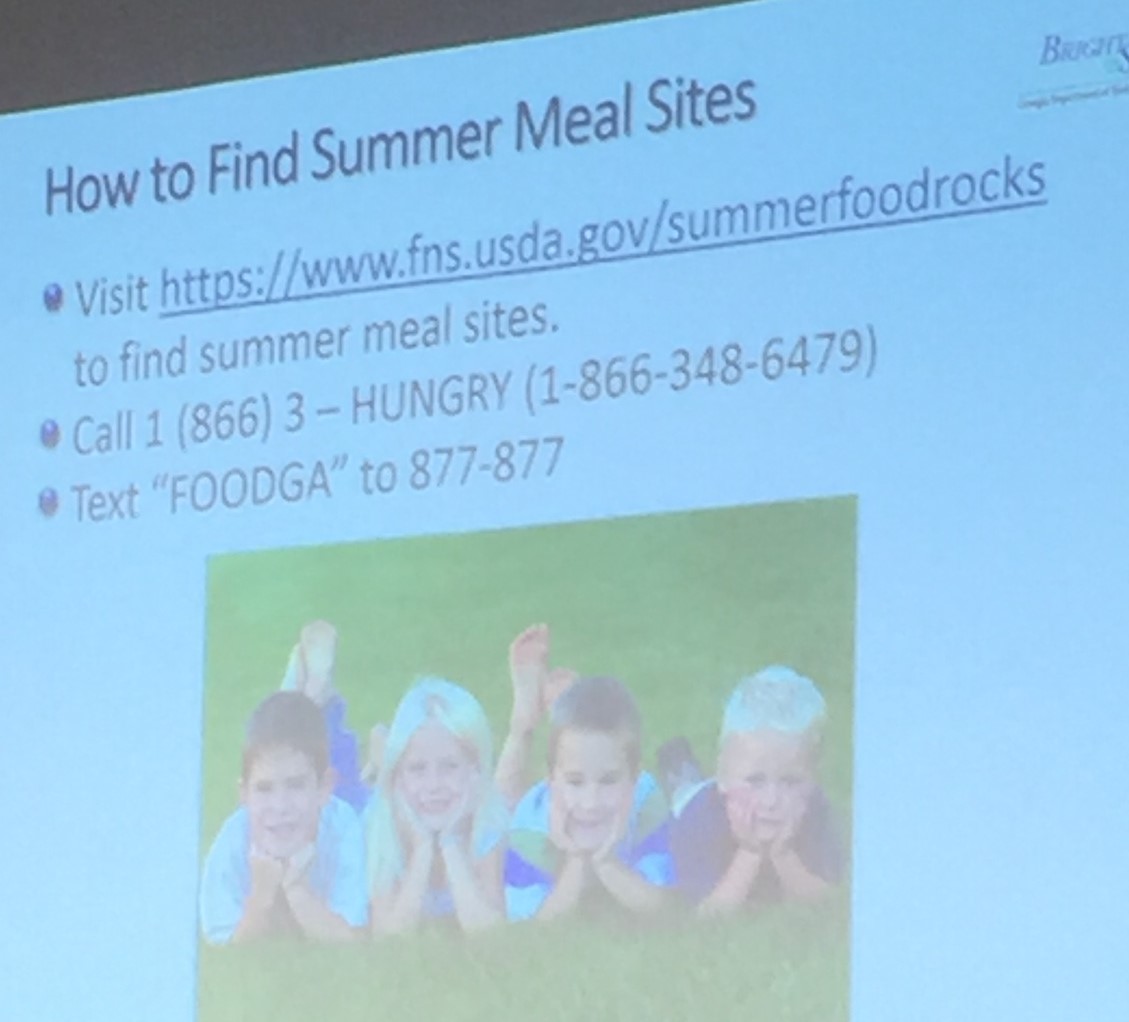 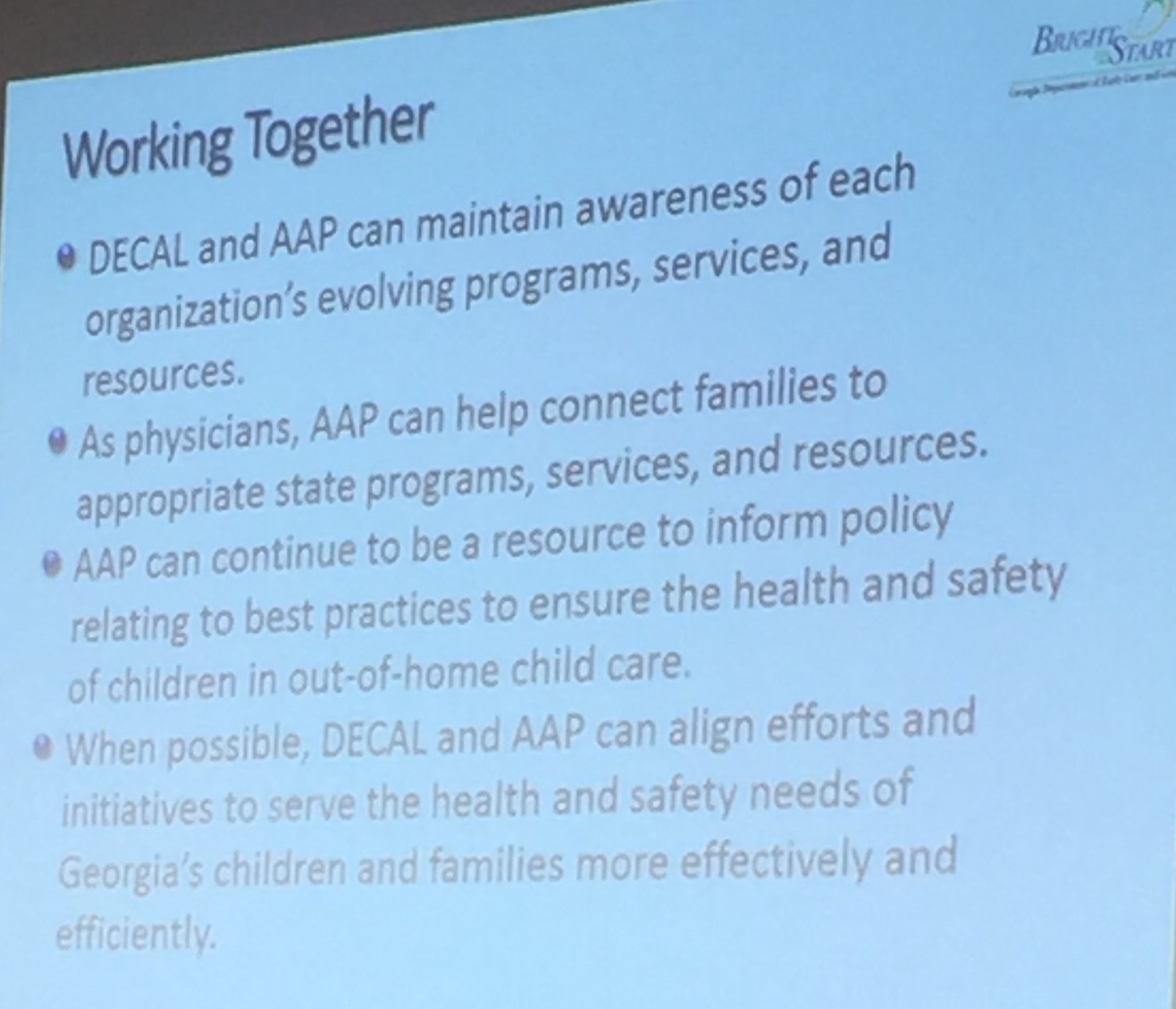 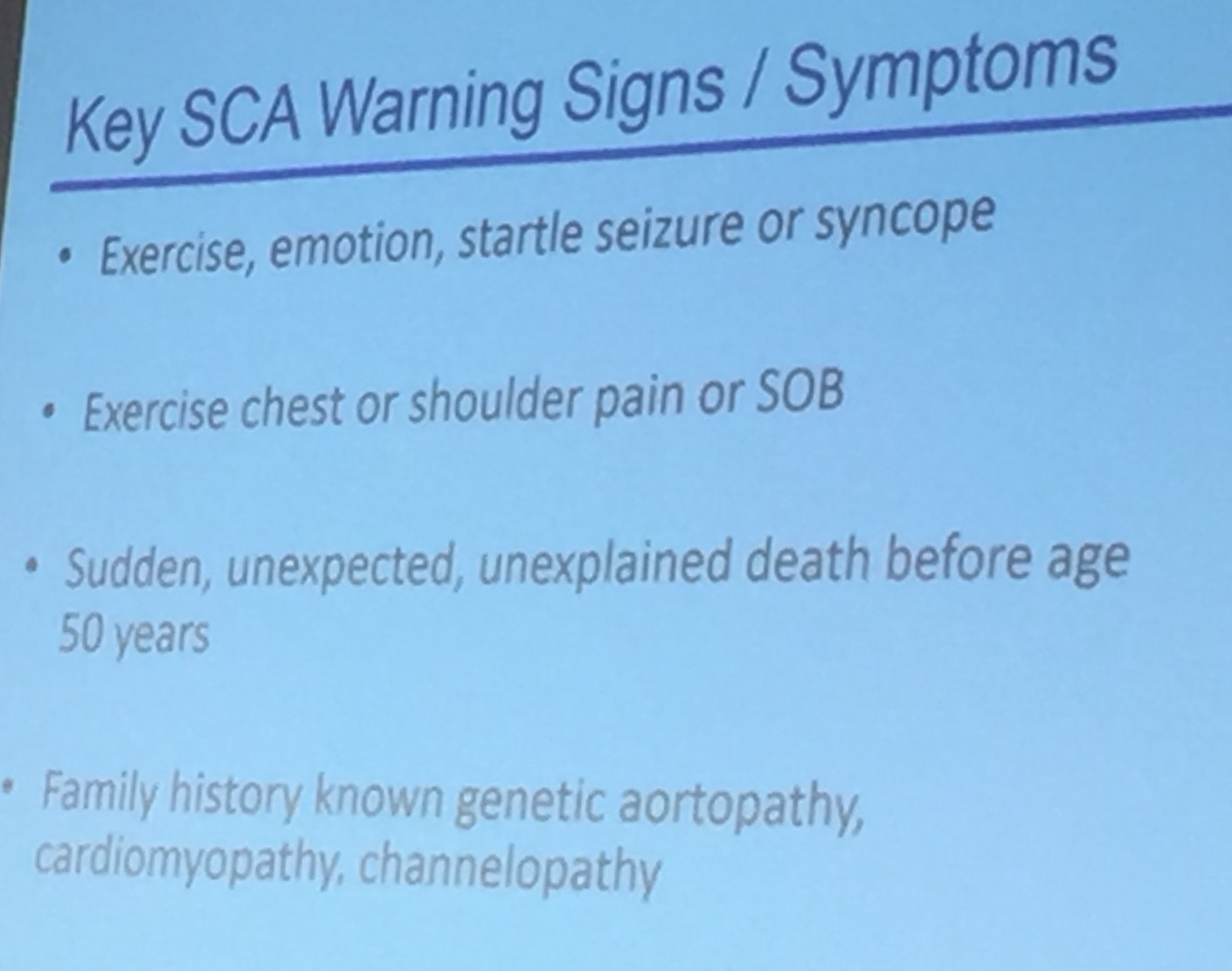 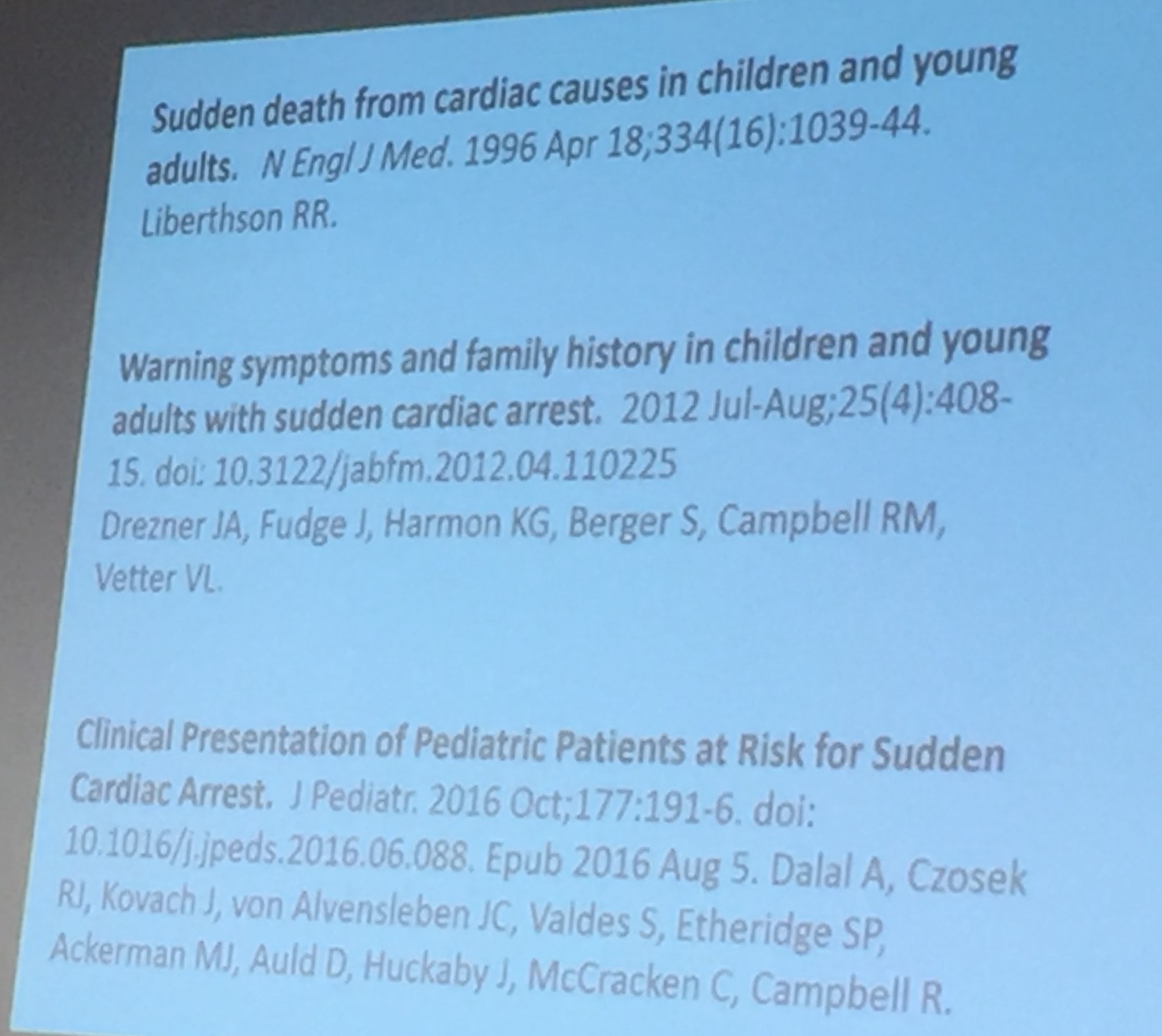 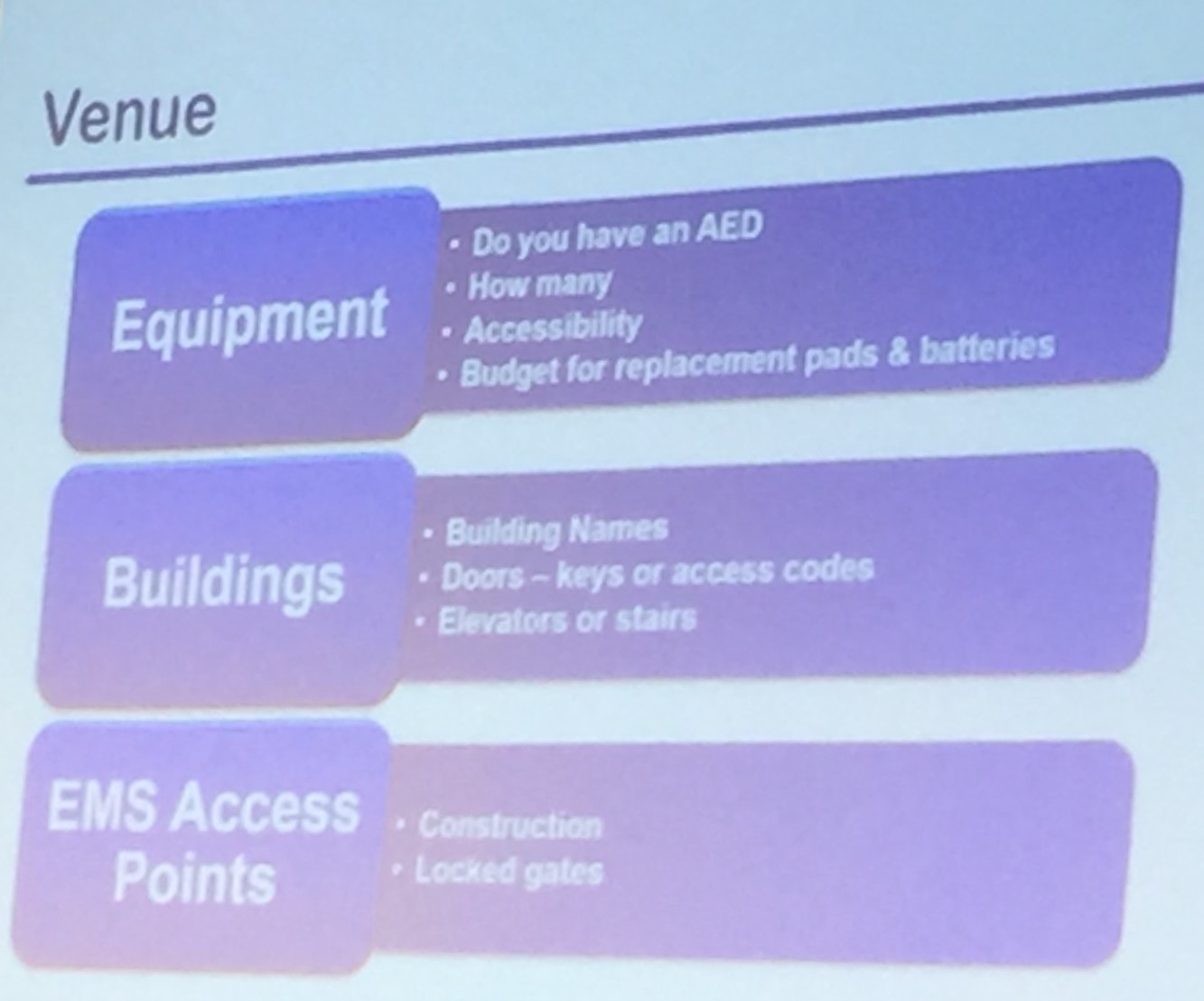 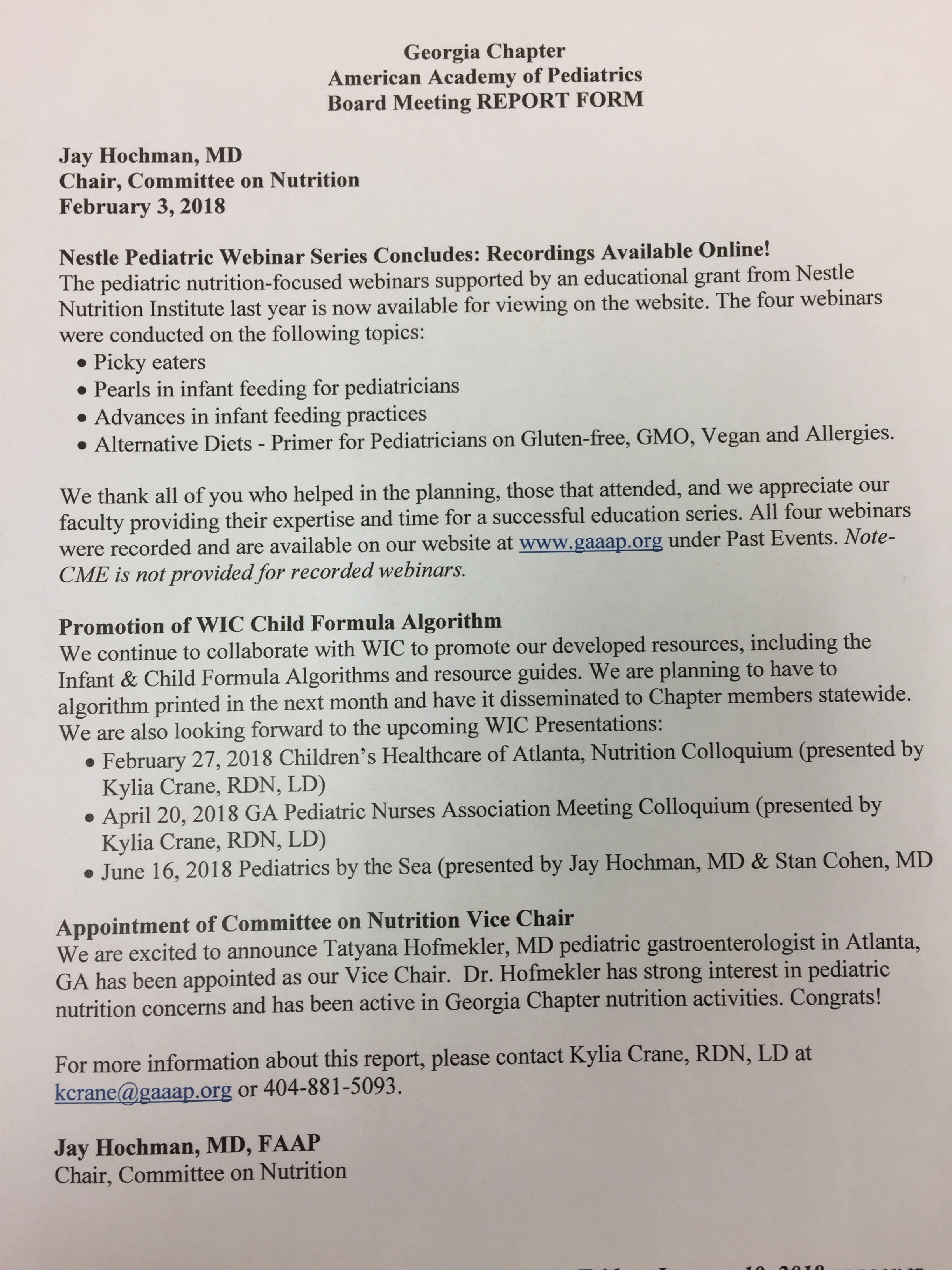 Besides the focus on legislation and access to care, the AAP meeting provided an infectious disease update from Dr. Harry Keyserling, membership update by Dr. Roma Klicius, the Pediatric Foundation Report by Dr. Bob Wiskind, an update on oral health care by Dr. Chevron Brooks, a brief update on AAP Friends of Children by Dr. Jay Berkelhammer, and discussion about transitional care.

With regard to the infectious diseases update, Dr. Keyserling noted that despite the flu vaccine’s lower “match” this year and its reduced effectiveness, it is still quite important to receive the flu vaccine.

Here are a couple of slides (used with permission) regarding the flu:

Risk of Death from the Flu 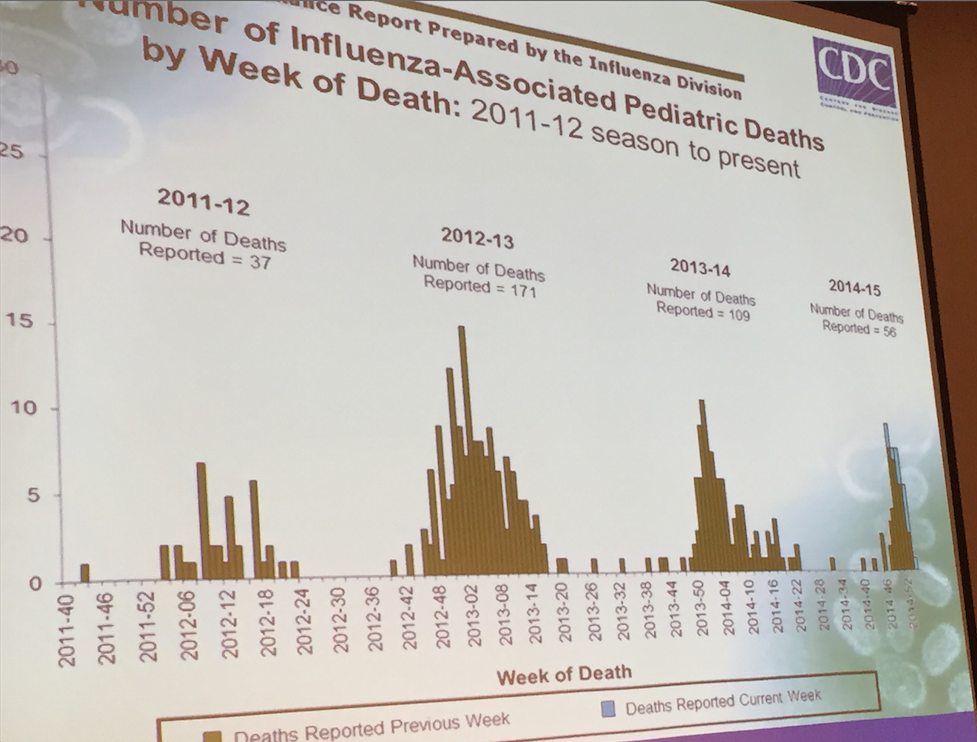 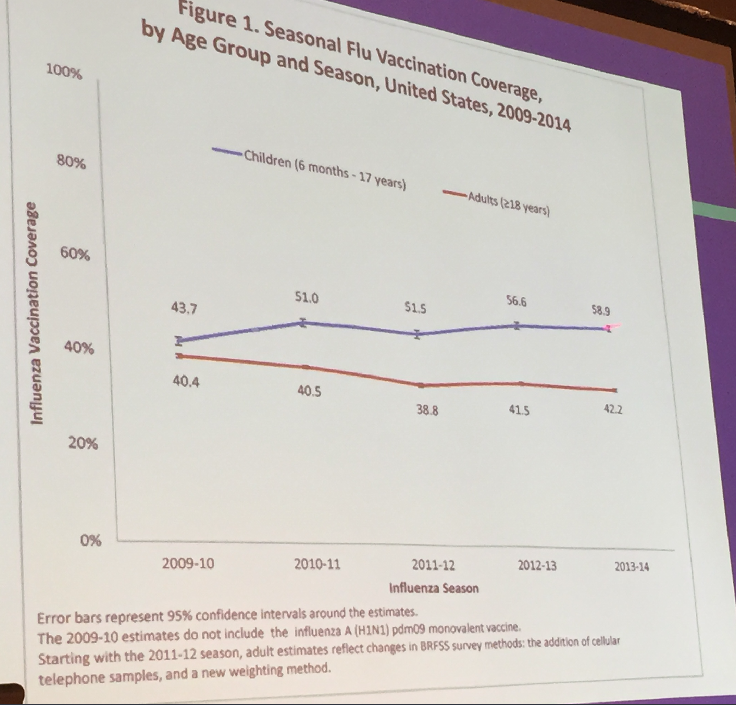 Bottomline: The AAP is working on preventing deaths from all vaccine-preventable deaths, including the flu.

Since my job at the AAP is to work on nutrition-related issues, I would welcome suggestions for areas of concern.  As there are separate areas devoted to obesity and breastfeeding, my goal is to work on other aspects of nutrition in children.  Some ideas that have come up already include an update on gluten-related disorders and nutritional supplements.  Any other advice?

Scarier than Ebola  — From NY Times (an excerpt)

“Do me a favor. Turn away from the ceaseless media coverage of Ebola in Texas — the interviews with the Dallas nurse’s neighbors, the hand-wringing over her pooch, the instructions on protective medical gear — and answer this: Have you had your flu shot? Are you planning on one?

During the 2013-2014 flu season, according to the Centers for Disease Control and Prevention, only 46 percent of Americans received vaccinations against influenza, even though it kills about 3,000 people in this country in a good year, nearly 50,000 in a bad one….

On CNN on Monday night, a Dallas pediatrician was asked about what she had advised the families she sees. She said that she urged them to have their children “vaccinated against diseases that we can prevent,” and that she also stressed frequent hand-washing. Ebola or no Ebola, it’s a responsible — and frequently disregarded — way to lessen health risks.

So are these: fewer potato chips. Less sugary soda. Safer sex. Tighter restrictions on firearms. More than 30,000 Americans die from gunshots every year. Anyone looking for an epidemic to freak out about can find one right there.”