Lately, there have been a lot of articles on neurocognitive function.  The latest (A Gold et al. JPGN 2020; 70: 225-31) describes the myriad of problems facing children with intestinal failure (IF). The authors literally used 12 different measures of neurocognitive and academic measures –though not all 28 subjects had each of these measures (Table 2).

There are a lot of risk factors for neurodevelopment impairment in these children with IF: prematurity, nutritional status/specific nutrient deficiencies, cholestasis, need for anesthesia/surgeries

My take: More than half of children with IF had neurodevelopemental impairment.  In this cohort, recurrent sepsis in the first year of life and sustained cholestasis were associated risk factors.

Here are some notes and a few slides from NASPGHAN’s plenary session.  There could be errors of transcription in my notes.

Benjamin Gold, NASPGHAN president and part of our GI group, GI Care For Kids, welcomed everyone to the meeting. 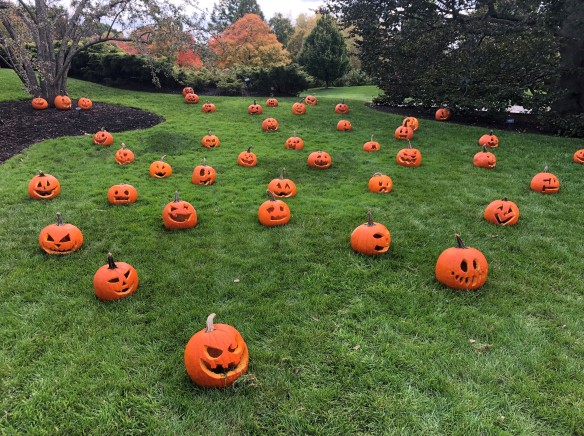 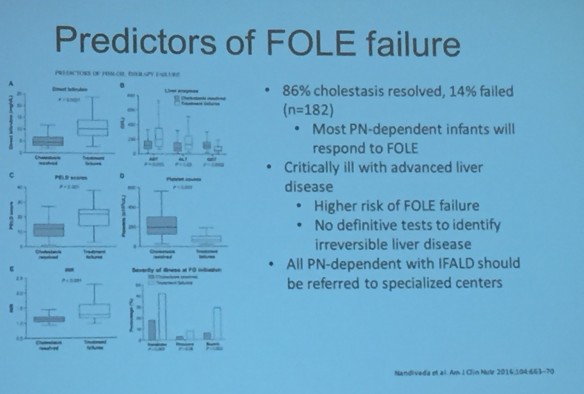 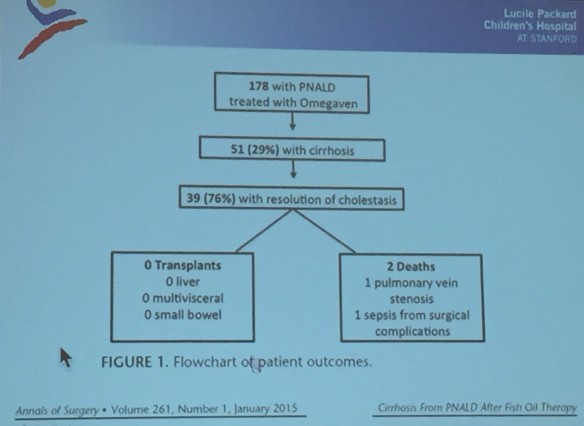 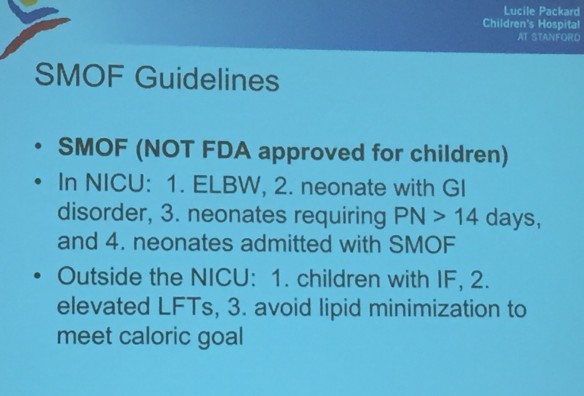 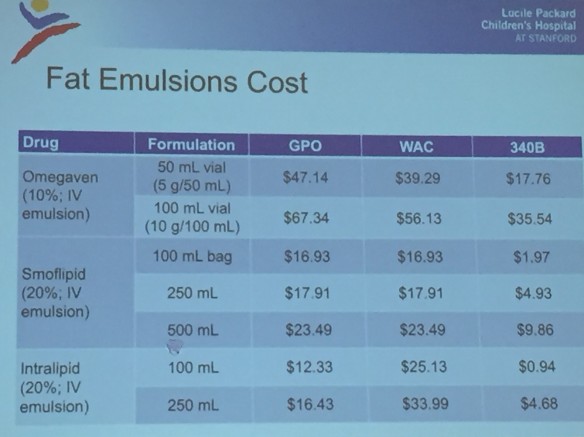 Bram Raphael  Getting In Line: Towards a Clinical Practice Guideline For CVC Salvage 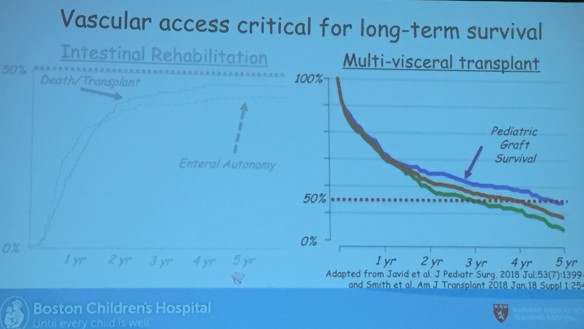 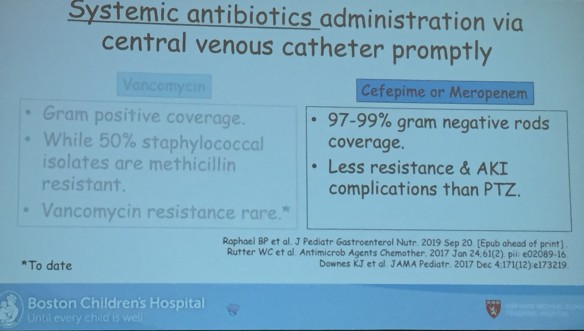 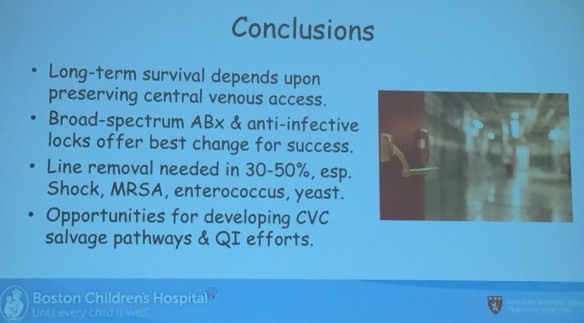 Disclaimer: This blog, gutsandgrowth, assumes no responsibility for any use or operation of any method, product, instruction, concept or idea contained in the material herein or for any injury or damage to persons or property (whether products liability, negligence or otherwise) resulting from such use or operation. These blog posts are for educational purposes only. Specific dosing of medications (along with potential adverse effects) should be confirmed by prescribing physician.  Because of rapid advances in the medical sciences, the gutsandgrowth blog cautions that independent verification should be made of diagnosis and drug dosages. The reader is solely responsible for the conduct of any suggested test or procedure.  This content is not a substitute for medical advice, diagnosis or treatment provided by a qualified healthcare provider. Always seek the advice of your physician or other qualified health provider with any questions you may have regarding a condition.

This was a retrospective cohort study of infants with IF with a minimum follow‐up of 12 months in 2008–2016. Patients were stratified into 2 groups: group 1 received SMOFlipid; group 2 was a historical cohort who received Intralipid. The primary outcome was liver function evaluated using conjugated bilirubin (CB) levels…

I did not make it to this year’s meeting but did get a chance to catch up on a lot information via the PG 2018 Syllabus and based on information posted online.

Here are a couple of highlights for me:

Slides regarding the topic of Treat-toTarget Dr. Eric Benchimol:

Slides regarding GI symptoms and autism from Dr. Kara Margolis:

Slide regarding the frequency of bariatric surgery: Dr. Rohit Kohli: 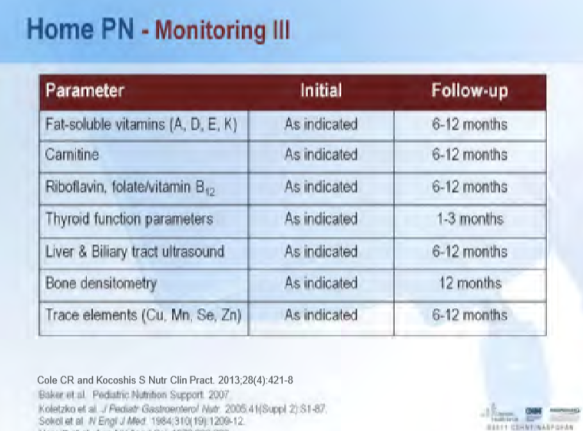 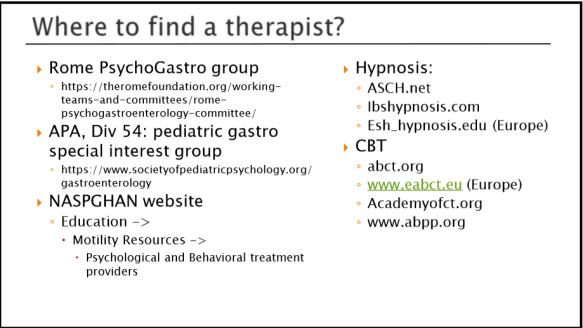 The authors note that end-stage renal failure has not been reported in association with intestinal failure, though proteinuria is associated as a risk factor.

My take: This observational study shows a high frequency of kidney issues in children with intestinal failure. With improvements in survival, chronic kidney disease could become a more significant clinical issue.

Tweet below indicates need for careful nutrition input when children are placed on unusual diets, including the ketogenic diet.

Dr Hofmekler is now part of GI Care for Kids (my group) and provided a terrific presentation.

My take: this study illustrates the challenges in reducing hospitalization.  While the authors did not identify social/demographic factors, my experience is that there are some families who are much more capable than others in taking care of children with complex problems.  If all children had the best parents, that would truly allow the hospitalization rate to be reduced much lower. 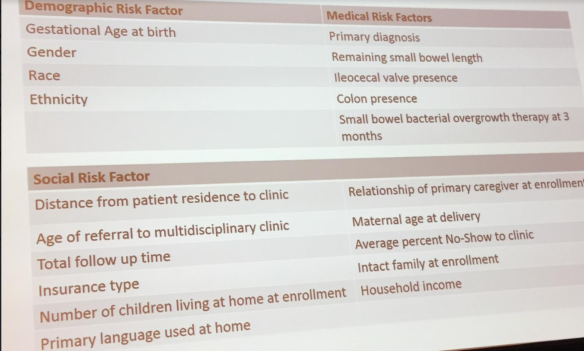 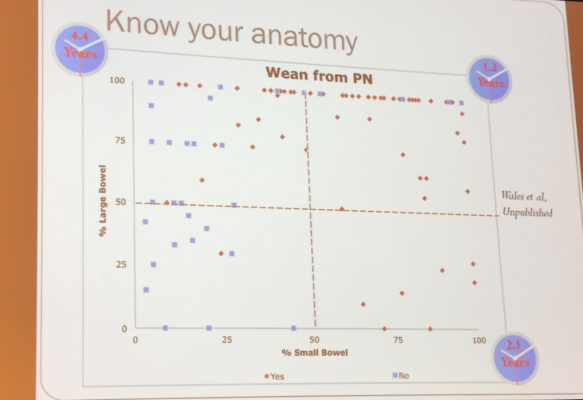 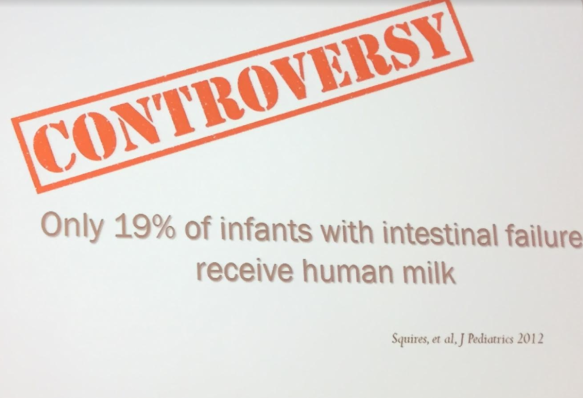 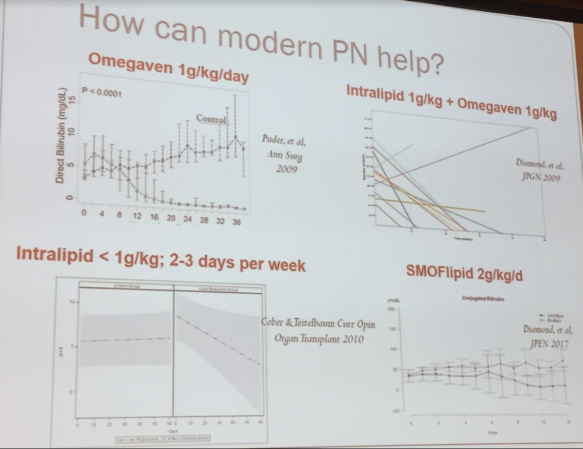 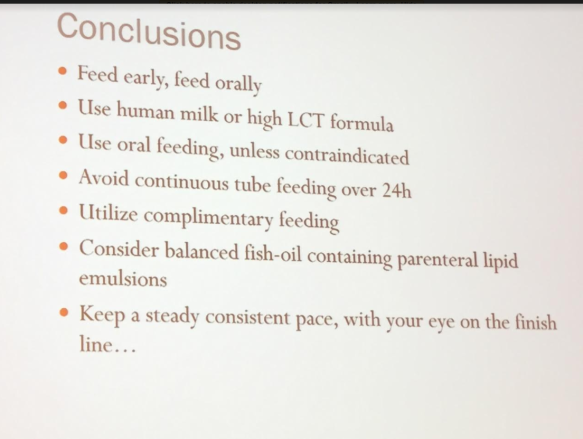 A recent review (CP Duggan, T Jaksic. NEJM 2017; 377: 666-75) concisely reviews recent advances in pediatric intestinal failure.  Most of the review has been covered elsewhere in this blog.  A couple of key points:

A retrospective study was performed including all children with IF between 2000 and 2015 who underwent a DXA measurement and/or a hand radiograph. Z-scores of BMD total body (BMD TB) and lumbar spine (BMD LS), bone mineral apparent density (BMAD) and bone health index (BHI) were collected. A low BMD and low BHI were defined as a Z-score ≤ -2. DXA and DXR results were compared for cases in which a DXA and hand radiograph were performed within a 6 months’ interval.

Forty-six children were included. Overall, 24.3% of the children had a low BMD at the first DXA at a median age of 6 years; correction for growth failure (n=6)) reduced this to 16.2%. Fifty percent had a low BHI at the first hand radiograph. Median DXA and BHI Z-scores were significantly lower than reference scores. Age, duration of PN and surgical IF were related to lower Z-scores at the first DXA. Paired DXA and DXR results (n=18) were compared, resulting in a Cohen’s kappa of 0.746 (‘substantial’) for BMD TB. Spearman’s correlation coefficient for BHI and BMD TB Z-scores was 0.856 (p<0.001). Hand radiography had a sensitivity of 90% and specificity of 86% (BMD TB).

Up to 50% of the children had a low BMD. Children with IF have a significantly poorer bone health than the reference population, also after weaning off PN. Bone health assessment by DXA and DXR showed good agreement, especially for Z-scores ≤ -2. DXR assessment using BoneXpert software seems to be feasible for monitoring of bone health in children with IF.

Link: A comparison of Broviac® and peripherally inserted central catheters in children with intestinal failure

Central venous catheters (CVCs) are a source of morbidity for children with intestinal failure (IF). Complications include infection, breakage, occlusion, and venous thrombosis. Broviacs® have traditionally been preferred, but peripherally inserted central catheters (PICCs) are gaining popularity. This study compares complications between Broviacs® and PICCs in children with IF.

Although Broviacs® and PICCs had similar complication rates, there were fewer central venous thromboses associated with PICCs. This should be considered when choosing catheters for children with IF.

My take: Despite some possible advantages of PICC in this study, a prospective randomized study is needed if one is to make a compelling argument regarding better outcomes.  Given the retrospective nature of this study, it could be that the sicker patients may have been more likely to receive a Broviac® and this could have skewed the results.