I recently had the opportunity to review the topic of neonatal cholestasis with my neonatal colleagues.  I reviewed two related conditions: parenteral nutrition associated liver disease (PNALD) and neonatal acute liver failure (NALF).  Some of the material incorporates recommendations from NASPGHAN cholestasis guidelines and from NASPGHAN cholestasis slidesets. Much of the slideset information is publicly available on a YouTube lecture by Dr. Linda Book (link at bottom). 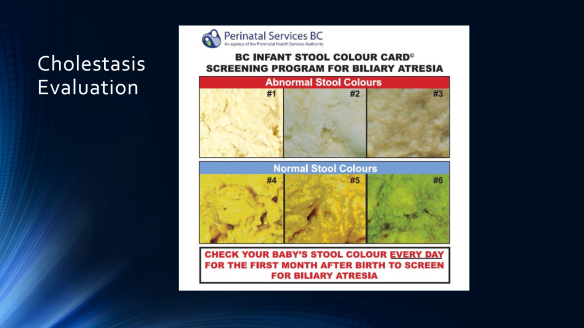 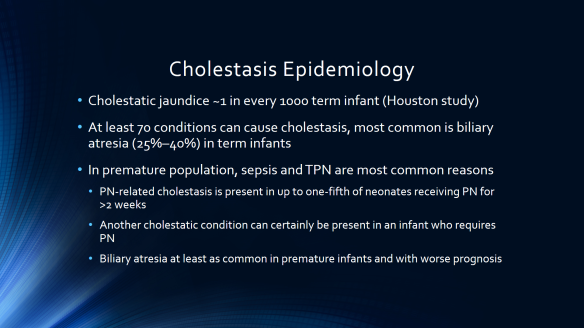 This study showed that higher lipid intake in a cohort of neonates born at <30 weeks during the first 2 weeks after birth was associated with a lower incidence of brain lesions and dysmaturation when examined by MRI at term equivalent age (TEA).

Details: This prospective cohort study examined energy/lipid intake in the first 2 weeks of life. Eligible patients were neonates ≤30 weeks.  Group 1 with 27 patients had birth weight median of 900 gm compared with Group 2 with 15 patients had median weight of 844 gm. During the first year of the study, participants received a soybean emulsion whereas in the last year of the study, the neonates received a mixture of soybean and olive oil (Clinoleic).

Key finding: After adjusting for clinical risk scores and sepsis, the authors found that the higher energy/lipid intakes resulted in improved brain MRIs in group 1. A “10 Kcal/kg/day increase in energy of 0.7 g/kg/day increase in lipids intake would reduce the risk of having more severely abnormal MRI at TEA by >60%.”

Here are some slides from my talk relevant to this topic and to parenteral nutrition associated liver disease (PNALD):

Many have advocated for the use of parenteral fish oil lipids like Omegaven which are rich in omega-3 polyunsaturated fatty acids (O3FAs), though the data in support of them are limited (New lipid emulsions — lacking data to support usage …).

A recent study (J Pediatr 2014; 165: 59-64) identified seven liver-inclusive intestinal transplants who had received O3FAs.   This retrospective review study took place between 2003-2012.  These seven patients had received O3FAs for a mean of 62% of their total life span before transplant.  While these patients almost all had resolution of cholestasis (mean total bilirubin 0.7 mg/dL at time of transplant), advanced fibrosis (stage 3 or 4) was noted on explant pathology.  The histologic inflammatory scores were lower (P=.056) in comparison to O6FA group.

Bottomline: Continued investigation of O3FA emulsions in PNALD is needed and assessing liver histology may be needed prior to intestinal transplantation.

As noted on previous blog entries (see below), there has been significant enthusiasm for fish oil based lipid emulsion (FOLE) despite a lack of data showing superiority compared with standard soy-based lipid emulsions at similar dosing.  More data for FOLE helping infants with cholestasis are available (J Pediatr 2013; 162: 793-8).

Design: Single center, prospective observational study of 57 infants with parenteral nutrition-associated liver disease (PNALD) which  took place between 2007-2011.  All infants were between 2 weeks and 6 months of age at enrollment.  At enrollment, FOLE (Omegaven) at a dose of 1 g/kg/d was infused over 24 hrs.  FOLE which is not FDA-approved is available on a compassionate use protocol.

The authors note that none of the infants who died had liver failure; most deaths were due to multi-organ failure and sepsis.

In the discussion, the authors state “the most significant finding from this study is the effectiveness of FOLE in resolving cholestasis irrespective of the initial serum bilirubin values.”  I take issue with this statement primarily because the design of the study does not allow such attribution.  Without a randomized trial comparing FOLE to standard intralipids, this statement overstates any conclusion that can be drawn from this study.  Given the fact that resolution was correlated with advancement of enteral feedings, it is plausible that a similar result would occur with standard intralipids.

The authors make a number of other speculations about the potential superiority of FOLE over standard soy-based lipid emulsions, but concede that “our study was not adequately equipped to address” the association of reduced intralipid with improvement in cholestasis.  Despite this concession, the authors boldly proclaim in the concluding paragraph: “while awaiting the more general availability of FOLE, infants at high risk should be identified early and referred to centers that provide the option of FOLE…in which families are fully informed of both the potential benefits and limited current data.”

As discussed in previous blog entries (PNAC, PNALD, and IFAC, More on PNAC, Four advances for intestinal failure), the right amount of lipid and the type of lipid both can contribute to parenteral nutrition associated cholestasis (PNAC).  More information about SMOFlipid which is a complex mixed-type lipid emulsion derived from soybean, coconut, olive, and fish oils is available (JPGN 2012; 54: 797-802).  SMOF contains 30% soybean oil, 30% MCT, 25% monounsaturated fatty acids, and 15% fish oil.

This study had a retrospective cohort comparison design & examined serum bilirubin over 6 months in children with PN-associated cholestasis (PNAC).  In one cohort, 8 patients received the SMOFlipid and the other 9 patients continued on Intralipid (IL).

While the authors state that SMOF may have important properties to prevent PNALD, the study has limited ability to draw any firm conclusions.

The authors state that no other treatment innovations were introduced; however, the authors overlook the large discrepancy in lipid volume administered.  The IL group was receiving much more lipid both before and during study.  Prior to entry of study, the IL group was receiving about 3.1 g/kg/day whereas the SMOF group about 2 g/kg/day; the SMOF group continued initially at the same lipid dosing with the new formulation.  This is one of the problems with historical controls.  While the authors might believe that the cholestasis improved because of the lipid content, the key factor may in fact be the amount of lipid given.

In the same issue (JPGN 2012; 54: 803-11), specific plant sterols (PS) were elevated among neonates with intestinal failure-associated liver disease (IFALD).  This study looked at 28 neonates and 11 children from Finland who required PN for more than 28 days.  Specific markedly-elevated PS included stigmasterol, sitosterol, avenasterol and campesterol (Table 4 in study).  Some of these PS in the neonates were more than 20-fold higher than healthy controls.

In a previous blog (Four advances for intestinal failure), one of the advances for intestinal failure that was noted was the reduction of lipid infusions with parenteral nutrition which reduces IFAC.  This study adds additional information to this area.  In this prospective study, 31 patients were enrolled in a reduced IV fat emulsion group and compared with a matched historical control group.  The reduced fat group received 1gm/kg of a standard soybean-based lipid emulsion (liposyn 20%) twice weekly.  Patients were eligible if they received PN for >2 weeks and had a direct bilirubin >2.5 mg/dL.

The reasons why lipids may contribute to PNAC/PNALD/IFAC include the presence of phytosterols.  This in turn may damage hepatocytes via the farnesoid X receptor.  One other aspect of the study was that the fat-restricted cohort had a higher mortality.  This was thought to be related to the cohort being sicker rather than to any nutritional effect.  Specific causes of death included respiratory failure in a patient with an abdominal wall defect, chylothorax/sepsis in a patient with a congenital diaphragmatic hernia, and cardiopulmonary failure in a patient with pulmonary hypoplasia.

The article does throw into question whether the use of a fish oil lipid preparation is needed to improve cholestasis.  In studies supporting fish oil preparations, a confounder was that the total lipid administered was reduced to 1 gm/kg/day in comparison to soybean lipids which were administered at 2-3 gm/kg/day.  This study suggests that reducing the total amount of lipid infusion is the more important factor.

The accompanying editorial makes a couple of useful points: