Here is link to original study: Increased Risk of COVID-19 Among Users of Proton Pump Inhibitors

From ACG:  Information Sheet and FAQs About Proton Pump Inhibitors (PPIs) and Risk of COVID-19

This study shows an association but does not prove that PPIs increase risk of COVD-19.  Patients taking PPIs may have other attributes that increase their risk compared to those who are not taking PPIs. 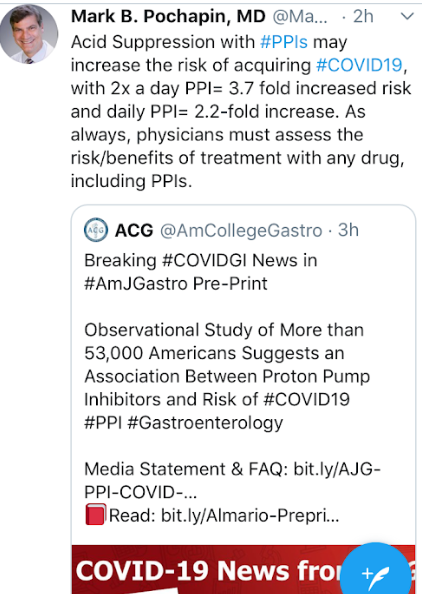 Here is some more information on twitter thread of this topic:

11. We found PPIs were associated with a *dose-response* risk of #COVID19, meaning higher the dose, higher the risk. Twice daily PPI=3.7x risk. Once daily or less=2.2x risk. The effect persisted for long vs. short-term use. In contrast, less powerful H2RAs revealed no risk.

From ACG SmartBrief (thanks to Ben Gold for this):

A study published in The American Journal of Gastroenterology found no link between the use of proton-pump inhibitors and increased dementia risk. The study, led by Muhammad Ali Khan, MD, examined 11 studies with a combined 642,949 participants, and researchers said “PPI use among patients who have a valid indication for it, should not be curtailed because of concerns about dementia risk.”

Long-term use of proton pump inhibitors (PPIs) has been associated with a wide variety of potentially serious adverse effects including a possible increased risk of dementia. Studies evaluating this association have reached divergent conclusions. We aimed to evaluate this proposed association further and to assess the quality of the evidence in its support.

We searched MEDLINE, EMBASE, ISI Web of Science, and Cochrane databases for studies examining a link between PPI use and dementia, up to February 2019. Studies reporting summary results as hazard ratio (HR) or odds ratio (OR) were pooled using the DerSimonian and Laird random-effects model for meta-analyses. Methodological quality of individual observational studies was assessed using the Newcastle-Ottawa scale and the overall quality of evidence rated as per the GRADE approach.

We found no evidence to support the proposed association between PPI use and an increased risk of dementia. PPI use among patients who have a valid indication for it, should not be curtailed because of concerns about dementia risk. 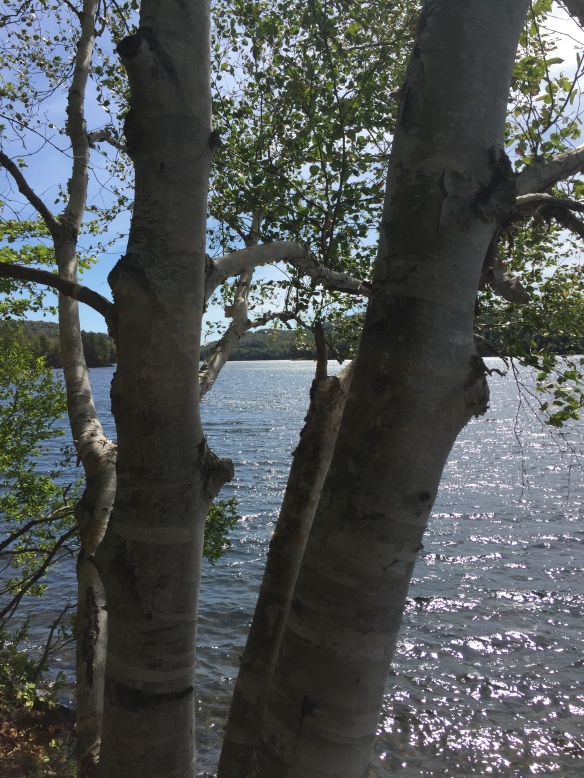 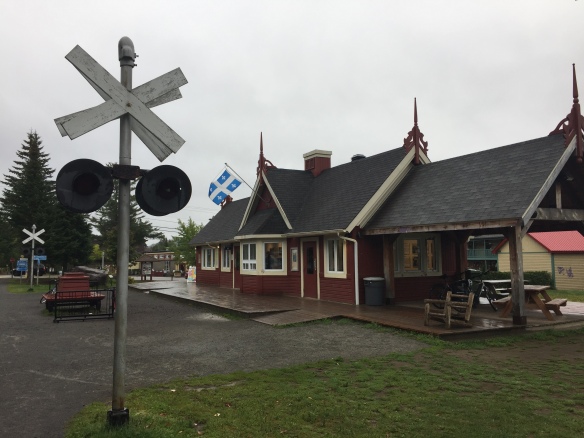 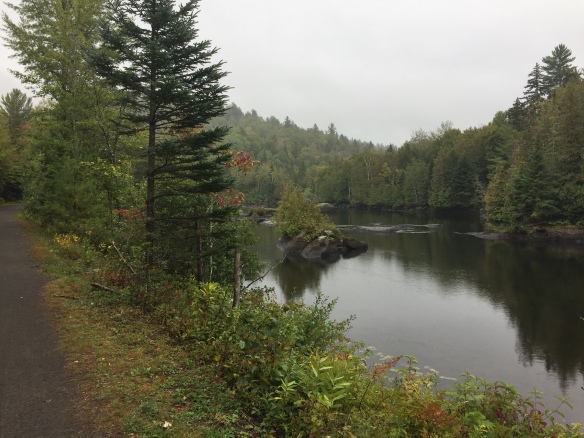 People who use certain acid-suppressing drugs for two years or longer are at increased risk of vitamin B12 deficiency, which can lead to anemia, neurological problems or dementia, researchers reported on Tuesday.

The drugs in question are called proton-pump inhibitors, or P.P.I.’s, and histamine 2 receptor antagonists, and they are available by prescription and over the counter under brand names like Prevacid, Prilosec and Nexium. Nearly 157 million prescriptions were written for P.P.I.’s alone last year.

“People who are taking these medications are more likely than the average person to be vitamin B12 deficient, and it’s a potentially serious problem,” said Dr. Douglas A. Corley, senior author of the new study, published in The Journal of the American Medical Association. “This raises the question of whether people taking these medications for long periods should be screened for vitamin B12 deficiency.”

Dr. Corley has received funding from Pfizer, which makes a P.P.I. called Protonix.

He and his colleagues at Kaiser Permanente in Oakland, Calif., examined the medical records of 25,956 adults who received vitamin B12 deficiency diagnoses between 1997 and 2011, comparing them with 184,199 patients without B12 deficiency during that period.

Patients who took P.P.I’s for more than two years were 65 percent more likely to have a vitamin B12 deficiency, the researchers found. Higher doses of P.P.I’s were more strongly associated with the vitamin deficiency, as well.

The new study is the largest to date to demonstrate a link between taking acid suppressants and vitamin B12 deficiency across age groups. Earlier small studies focused primarily on the elderly.

Robert J. Valuck, a professor of pharmacy at the University of Colorado in Aurora, was surprised that the association in the new report was strongest in adults younger than age 30. “It’s not safe to assume vitamin B12 deficiency is only an issue in the elderly,” he said.

Bottomline: patients (not just elderly) on chronic PPIs may need to be tested for vitamin B12 deficiency.

Are we missing Vitamin B12? | gutsandgrowth

Two recent review articles on Clostridium difficile are quite useful:

The first publication reviews acid suppression and the risk of C difficile infection (CDI).  It starts off with  a terrific piece of advice from Sir William Osler: “One of the first duties of the physician is to educate the masses not to take medicine.”  The authors note that pH above 4 has been shown to increase bacterial survival, including  C perfringe spores in a mouse model.  In addition, the article notes that there have been concerns as early as 1982 that acid suppression could be a risk factor for CDI.  Several recent studies were summarized, including the following:

The FDA has stated that PPIs may be associated with an increased risk of CDI.  In addition, the use of antibiotics “appear to act synergistically with PPIs.”  Thus, the authors recommend stopping PPIs in those who do not need them.  Periodic ‘holidays’ or dosing step-downs may help assess continued need for PPIs.

The second publication succinctly reviews the diagnosis and management of CDI.  The various diagnostic methods are compared in Table 1.  Therapeutic options for 1st time infection are reviewed in Table 2.  For adults with mild-to-moderate infections, metronidazole (500 mg TID for 10 days) is preferred.  Vancomycin or Fidaxomicin are recommended for more severe infections.

Table 3 lists treatment options for recurrent CDI.  Repeat course of any of the 1st round treatments can be considered depending on patient’s illness severity.  In addition, other potential treatments included the following:

While this blog in previous posts has pointed out some shortcomings of proton pump inhibitors (PPIs), at the same time this class of medications remains a crucial part of pediatric gastroenterology practice.  In most patients, the benefits of these medications far outweigh the potential risks.

One of the risks has been a low rate of increased infections due to lowering gastric acid which provides some protection against enteric infections.  More information about PPIs show that these medications are not likely to increase the risk of small intestinal bacterial overgrowth (SIBO) (Am J Gastroenterol 2012; 107: 730-35 –thanks to Ben Gold for showing me this article).

In this retrospective study from 2004-2010, 1191 patients were included with 566 receiving PPI therapy.  Mean age: 63 years for PPI users and 59 years for nonusers. Glucose breath hydrogen testing (GBHT) for bacterial overgrowth did not differ significantly between PPI users and nonusers.  The authors acknowledge that there have been conflicting reports previously between the use of PPIs and the development of SIBO (see Table 5 of article); interestingly, SIBO with PPIs has occurred predominantly in studies from Europe.  The authors note that while achlorhydria leads to SIBO, the intermittent surges of acid production with PPIs should be sufficient to prevent SIBO.

In a previous post (The Medical Pendulum and Gastroesophageal Reflux), I note that enthusiasm for proton pump inhibitors has started to wane.  In addition, a significant number of reported of potential side effects were referenced.  Another potential adverse effect is increasing the rate of spontaneous bacterial peritonitis (SBP) in patients with cirrhosis (Clin Gastroenterol Hepatol 2012; 10: 422-27).